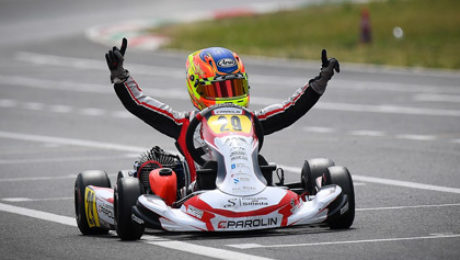 Parolin Motorsport is proud to announce that factory team’s young driver Christian Costoya is joining All Road Management, while continuing his 2022 karting programme with the Italian squad.

Guided by founder Nicolas Todt, All Road Management scouts and develops talents since 2003 with the ultimate goal of reaching the pinnacle of motorsports. Parolin Motorsport’s 11-year-old factory driver Christian Costoya has been selected by Todt’s group and will now be supported by the French manager’s extremely professional team. After having displayed his stunning skills last year, being crowned WSK Euro Series champion and Italian vice-champion, Christian has started the 2022 season on the right foot by winning the WSK Champions Cup and clinching silver medal at the WSK Super Master Series as well as at the Andrea Margutti Trophy. Furthermore, Costoya has claimed victory in Race 2 at the first round of the Italian ACI Karting Championship. As he begins a promising new adventure with All Road Management, the Spanish driver will keep competing with his Parolin MINI chassis at national and international level.

Parolin Motorsport is delighted to have contributed to such an important step in Christian’s career. Born in 2010, the young talent is the third Parolin driver who joins All Road Management, following in the footsteps of Gabriele Mini and James Wharton.

Khavalkin comes back strongly in 3rd place in the Euro 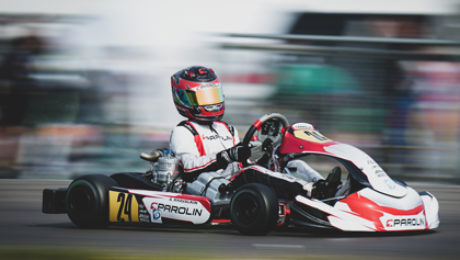 After his unfortunate absence from the last round of the OK-Junior European Championship, Anatholy Khavalkin proved that he is fit to play an important role in the rest of the season. The third round of the Champions of the Future Euro Series, held in Kristianstad in a variety of grip conditions, saw Khavalkin put in a strong fight to finish in the top five and move up to 3rd place in the standings. The performance of the Parolin Motorsport team was good in both categories, but the various hazards of the Final stages did not always reward the team’s work up to the end of the meeting.

The Swedish competition was affected by bad weather. On Saturday, the Qualifying Heats were held during continuous alternation of light rain and dry periods. While the drivers had to constantly adapt to the new conditions, the technical staff had to be very reactive to follow the weather’s whims. On Sunday, rain interrupted the OK-Junior Final while the OK Final was started on a wet track.

“From the point of view of preparation for the next FIA Karting European Championship, the Euro Series was very interesting,” analysed Marco Parolin. “We couldn’t imagine more varied conditions. It was not easy for all our drivers. In OK Maksim Orlov was very solid during the entire meeting and finished with a Final gain of eight places bringing his total progress to more than 30 positions. For his return to OK, Lorenzo Travisanutto brought his know-how to the team by ensuring superb Qualifying Heats. Unfortunately his Final race ended in retirement, as did Enzo Deligny, whose speed continued to increase. René Lammers started very well in the OK-Junior class, finishing 2nd in Qualifying and 2nd in the Super Heats. A crash on the last lap of the Final, on slicks in the rain, prevented him from a good result in the top five. Anatholy Khavalkin took three wins in the heats to join the top three at the start of the Final. He battled for a long time between 1st and 3rd positions before finishing 5th just before the red flag was shown because of the risks due to the lack of grip. Zac Drummond was not spared setbacks, but he persevered until the end to finish with a gain of 10 places in the Final.

“We have all the elements to prepare well in a fortnight for the upcoming European event in which the race for the two titles is our main objective.”

9th in Qualifying, two wins including a fastest time in a heat, 1st in Super Heat 2, 5th in the Final (+5 pl), 3rd in the provisional Championship ranking.

2nd in Qualifying, two wins and twice 2nd in the heats, 2nd in the intermediate ranking, retirement in the Final, 7th in the provisional Championship ranking (+2 pl).

18th in Qualifying, two retirements in the heats, 23rd in the Final with a gain of 10 places.

Excellent performance in the European KZ Championship in Genk 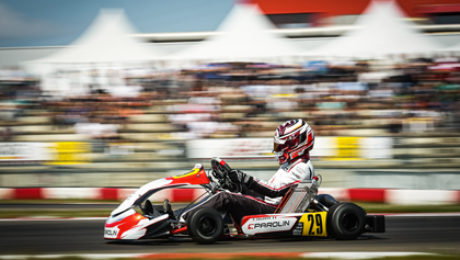 For the opening of the European KZ Championship in Belgium, Parolin Motorsport showed a remarkable level of performance which enabled its two drivers to play leading roles. Francesco Celenta started with the 2nd fastest time in Qualifying while Lorenzo Travisanutto came close to the Final top five in his first race in the category.

“The balance of the weekend is positive, even if we were not able to capitalise on the speed of our drivers,” said Marco Parolin. “Our two drivers worked very well with the team and I am satisfied with the progress made by our KZ department in such a short time. Francesco paid dearly for his jumped start in Heat 1 and Lorenzo for his spoiler in Heat 2. I think it would have been essential to start a few places further ahead to aim for the podium, because the standard of the top ten drivers was really high: they were all running similar times so it was not easy to overtake. It’s no coincidence that the top four drivers finished where they started. We leave Genk aware of our strengths, but also of the details we need to work on to try to improve our results in Cremona.”

2nd in Qualifying, 6th in the intermediate classification despite an incident and a loose spoiler in the first heat. 4th in the Super Heat, 8th in the Final, 7th in the provisional Championship ranking.

10th in Qualifying, 7th in the intermediate ranking, fastest lap in the Super Heat, 6th in the Final with the 2nd fastest time, 6th in the provisional Championship ranking.

25th out of 89 in Qualifying, three good heats, but two retirements due to incidents. Another retirement in the Super Heat, while qualification for the Final was in sight.

Deligny and Lammers in the European top three after Zuera 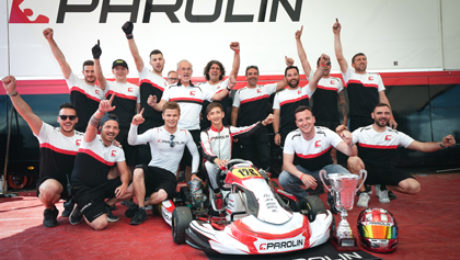 On the Spanish circuit of Zuera, Parolin Motorsport scored important points in the second round of the FIA Karting European Championship – OK and OK-Junior. Enzo Deligny again took 2nd in OK, both in the Final and in the standings, while René Lammers finished 4th in the OK-Junior Final and moved up to 3rd in the standings. Zac Drummond achieved his best result with a 6th place in the Final.

The meeting took place in sunny and warm weather. The 1,699m long Zuera circuit is demanding for the engines and requires a very well-tuned chassis. Slipstream plays an important role and the slightest mistake can have serious consequences. At Parolin Motorsport the equipment was again very competitive and the young drivers showed good progress.

“We regretted the absence of Anatholy Khavalkin who could not defend his 2nd place in the European OK-Junior Championship”, Marco Parolin noted. “Administrative reasons prevented him from going to Spain. Fortunately René Lammers and Zac Drummond reacted very well and Parolin Motorsport was able to continue to prove its high competitiveness. Lammers strengthened his 3rd place in the Championship standings by climbing up to 4th position, 0.170″ from the podium. It’s a pity that he was involved in a crash in a heat because he was in a position to finish better in the top three. Drummond was very fast during the Qualifying sessions and he took advantage of this to perform very well in the top three of the heats before ensuring a very good 6th place in the Final. Enzo Deligny had the opportunity to assert his status in OK during the whole event. Excellent in the top four of Qualifying and the heats, he won Super Heat B with panache and fought for the win in the Final before taking the second step of the podium. Thanks to the performance level of our Parolin/TM Racing karts, our drivers are progressing with each race in both categories. This is going to be an exciting season and our ambitions are very high. We are now preparing for the next round in Sweden.”

16th in Qualifying, two wins and a 2nd place in the heats, 10th in the intermediate ranking, 3rd in Super Heat B, 4th in the Final (+5 pl), 3rd in the provisional Championship ranking (+6 pl).