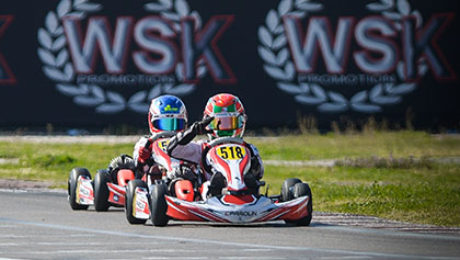 The first international championship of the year, the WSK Super Master Series, ended at Sarno with a superb victory for Rashid Al Dhaheri in 60 Mini, which also enabled Parolin to win the general classification. Although not a surprise considering the performance level of the Parolin chassis, this result is a pleasant reward for the Italian factory.

“We are extremely pleased with our 60 Mini win, confirming our tradition of success that has lasted for three consecutive years,” commented Marco Parolin. “We won this title in 2017 with Gabriele Minì, last year with Martinius Stenshorne and this season with Rashid Al Dhaheri. This is something we are proud of, especially because the level of competition in the Mini category continues to increase. We confirm our high standard as a team, and of course as a chassis manufacturer. In the other two categories, we worked hard this weekend to improve in the difficult conditions at Sarno, preparing for the next challenge, the WSK Euro Series.”

Parolin once again represented a large proportion of the 60 Mini field. The results included nine victories in the heats, 10 drivers in the top 13 of the Final and eight Parolins in the top 10 of the Championship. The numbers are always impressive.

Because of the importance of slipstreaming on the long Neapolitan circuit, Qualifying Practices were not always easy to manage for the very young drivers in 60 Mini. Keanu Al Azhari and Giovanni Trentin, however, managed to achieve the 2nd and 3rd fastest times among the 87 participants, while Rashid Al Dhaheri was 15th. The latter however completed exemplary runs and returned to the front of the competition on Saturday night. Starting from 6th in the Final, Al Dhaheri took the lead from the second lap and brilliantly controlled his opponents until the finish. He took the lead in the standings of the series and earned a well-deserved crown. Also very fast, Giovanni Trentin achieved his best result by entering the top 10 in the Final. Victim of a racing incident at the start of his Prefinal, Al Azhari unfortunately could not defend his chances in the Final.

It was also a Prefinal accident that delayed Gabriele Mini’s progress in OK. However, he managed to qualify 30th in the Final and a festival of overtaking allowed him to return to 8th position at the finish line. This remarkable effort allowed him to save his place in the top five overall of the WSK Super Master Series.

Although he had to overcome his 30th place in the OK-Junior Timed Practice, Brando Badoer did a great job moving up to 7th in the Final before finishing 11th. Martinius Stenshorne fell to the back of the pack during a clash on the second lap of the Final, which prevented him from enjoying his potential as much as he deserved.

After an exceptional start to the season, Parolin is preparing to start the WSK Euro Series next weekend which will take place on the same circuit of Sarno. The goal is clear: to work even harder with the young drivers of the team to improve the results they are able to achieve with the high-performance equipment from Parolin.

Superb OK win in the rubber at Muro Leccese 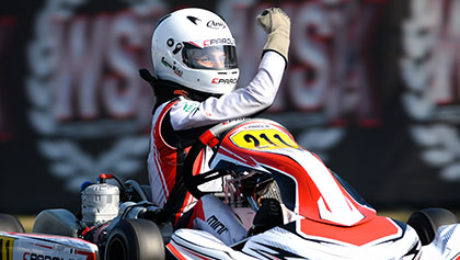 The third event of the WSK Super Master Series took place at La Conca in very strong grip conditions. Parolin chassis demonstrated their exceptional versatility by enabling their drivers to achieve top results at all levels. The success of Parolin was magnificently highlighted by the remarkable victory by Gabriele Mini in the prestigious OK category.

The third event of the WSK Super Master Series took place at La Conca in very strong grip conditions. Parolin chassis demonstrated their exceptional versatility by enabling their drivers to achieve top results at all levels. The success of Parolin was magnificently highlighted by the remarkable victory by Gabriele Mini in the prestigious OK category.

The Parolin Racing Team’s Junior drivers had to face the harshness of racing. Martinius Stenshorne and Brando Badoer both finished in 3rd place in their Prefinals, after much effort in the heats. The last race was not the easiest to negotiate. Only Badoer managed to confirm in 8th position while Stenshorne was delayed in a collision at the start. To finish 18th in these conditions remains an impressive feat. Not spared by problems, Alessandro Cenedese ended on a positive note by gaining 12 positions in this Final.

The race was no easier in 60 Mini. Rashid Al Dhaheri was initially held up by two competitors with problems ahead of him in Qualifying. Expecting to take pole position, he had to settle for 20th. Rashid then retired in two heats but still managed to move up to 12th in the Final and take 2nd in the WSK Super Master standings. Keanu Al Azhari was no better off with his 28th time, but he had a series of very good races with three fastest laps. He finished well in 8th place, again with the fastest lap. The incredible recovery by Giovanni Trentin, from 59th to 11th, completed a very positive picture for Parolin.

The Italian brand could indeed congratulate itself on seeing in 60 Mini its products to take pole position, seven places among the top 10 of the heats, victory in the two Prefinals and seven places in the top eight of the Final, including the three fastest laps of the race. At La Conca, the Parolin Racing Team took its fifth podium of the season.