Parolin in force at the Winter Cup 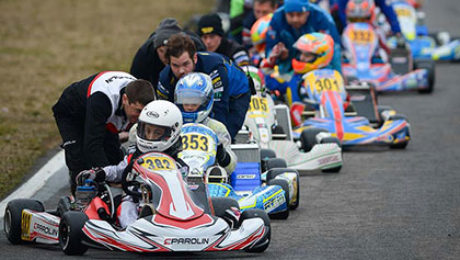 The tough results of the 2018 Winter Cup Finals did not reflect Parolin Racing Kart’s presence in the foreground during most of this famous competition. The Parolin chassis were certainly at the forefront of the performance multiple times, in OK-Junior with Gabriele Mini, in Mini Rok with Piotr Protasiewicz and also in KZ2 with the superb performance of Alessio Lorandi.

“On Saturday night, we had Parolin drivers among the favourites of three categories: Mini, Junior and KZ2”, congratulated Marco Parolin. “There were a number of incidents that prevented them from getting the results they hoped for on Sunday, but I think we put on a nice demonstration of our skill all weekend, regardless of track conditions. I am proud to see more and more Parolins on the track. Parolin was the third best represented brand of the field at Lonato, all categories combined. We dominated for a long time in Junior and Mini Rok before the hard circumstances of the race deprived Gabriele Mini and Piotr Protasiewicz of a fair reward. Alessio Lorandi’s rapid adaptation to his new Parolin chassis and his magnificent performances are very promising. We are very hopeful of shining and achieving great success at the next sporting event at Lonato in early March at the WSK Super Master Series.”

At the wheel of his Parolin / Iame, Gabriele Mini showed in OK-Junior that the equipment worked very well. After setting the fastest time he won two races and led the category before the Super Heats. He started from the front row at the start of the Final, but was forced to retire in the heat of the action. He nevertheless posted the best time of the whole race. Alessandro Cenedese managed to qualify despite a retirement in a heat, while the Australian James Wharton was close to the top 10 before giving up in the Final.

In the Mini Rok category, Parolin Racing Kart dominated the field with more than a third of the participants. Despite varying fortunes in the Final, six Parolins were in the top 14 of the Winter Cup. The Parolin Poland team driver Piotr Protasiewicz was the big favourite after his pole position in Qualifying and his three heat wins. Leader on Saturday night, fastest in Super Heat 1 and the record holder of the event, he started 2nd in the Final, but did not take the finish. Martinius Stenshorne started from a distance with his 33rd in Qualifying and was fighting in the leading group of the Final before finishing 6th. There was also solid progress for Brando Badoer, 17th and 7th in the Final, while Andrea Barberi of AV Racing team set the fastest time and reached 8th position.

Alessio Lorandi made an incredible KZ2 debut at the wheel of his new Parolin chassis. While discovering his equipment on Wednesday, he was already the fastest in his timed session on Friday and was 4 hundredth from pole position among the 94 participants. He then won three Qualifying Heats before being delayed by racing incidents. Despite these incidents, he did not hide the satisfaction at the convincing grip of his Parolin. 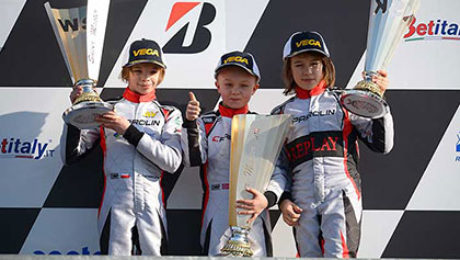 In the opening race of the WSK Super Master Series, Parolin Racing Kart has demonstrated the competitiveness of its equipment against strong competition. After the good performances recorded a week earlier at the same circuit of Adria, Parolin simply grabbed the top three places in 60 Mini and came close to victory in OK-Junior in very varied and often difficult conditions.

Marco Parolin was delighted by the turn of events at the beginning of the season. The new orientation of the brand towards the youth categories promises to be a promising success: “The drivers who shined this weekend in our colours are undeniably good drivers promised a bright future. We are proud that our chassis are contributing to their sporting ascent. We have worked actively to provide high-performance equipment that is accessible to all drivers and teams at the same time. We are very happy with this success in the two categories in which we have chosen to invest this year. It’s very rewarding for us.”

“We are in a very successful period in 60 Mini, but we will not let our guard down. The season is just beginning and we look forward to making the most of our current advantage to increase our potential and keep us at the top of the game. The development continues down to the smallest detail. It is the same in OK-Junior where we are already very fast with Gabriele Mini, who remains, do not forget, a rookie. He proved that he is already very competitive. Alessandro Cenedese, who was competing in his second Junior race, also had some good performances. The Parolin drivers, their entourage and the mechanics are delighted and there is an excellent atmosphere in our new awning. It is an important element so that everyone can give their best.”

Parolin accounted for nearly 30% of the 60 Mini entry at Adria. The Parolin chassis already achieved three of the four fastest times in Qualifying and confirmed by taking the top three places in the Final. Success was not long in coming for the young Norwegian Martinius Stenshorne, followed in 2nd place by the Pole Tymoteusz Kucharczyk, who posted the fastest lap in the race and was the record holder of the event. Brando Badoer, in a very elegant style, was once again on the podium to ensure Parolin’s triumph.

Gabriele Mini put on a great demonstration in OK-Junior. Delayed in his last Qualifying Heat, he made it a point of honour to win his Prefinal. He continued his momentum in the Final, attacking at the right moment to take the lead of the race a few laps from the finish. He missed his goal by a fraction, after being hit hard in the last corners. His 2nd place nonetheless marks an important step in his rapid progression in Junior and suggests other leading results will soon come.

The entire Parolin Racing Kart team is getting ready right now for the rest of the season, which has started in a very positive way. The next meeting of the Winter Cup in Lonato promises to be exciting for all those who have chosen to trust Parolin.