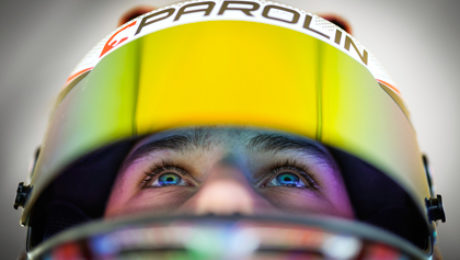 Parolin Motorsport has been looking to the future at the WSK Open Cup at South Garda Karting. Between chassis development work and the transition of some of its drivers to the next category, the Italian team has been working hard to prepare for the 2023 season. The performances recorded in Lonato in OK, OK-Junior and Mini proved to be very interesting.

Varied weather conditions allowed for very productive work. After rain on Friday, the weather was fine until the end of the competition with pleasant temperatures for the early autumn. The unpredictability of the racing did not lead to great results, but significant gains were made in all three categories in which Parolin Motorsport was competing.

“The WSK Open Cup has been very fruitful for us,” said Marco Parolin. “Each of our 11 drivers was able to showcase their skills at some point in the competition, while the technical data collected fed into our development programme for the coming season. Anatoly Khavalkin proved that he is already ready to shine in OK. Christian Costoya took the measure of the OK-Junior after a superb season in Mini, while Zac Drummond and Rene Lammers continued to show great potential. Jack Illife put in some great performances in the Mini heats and was 2nd after the Prefinals, but the Final was less favourable for him. William Calleja stayed in the top 10 of the class before finishing 7th in the Final. Angelo Bruno Blanco confirmed his progress by obtaining his best result of the year with a promising 15th position in the Final. Manuel Miguez Gayoso made a good comeback to 17th place and Billy van Staveren made a very good debut with us. The whole technical team is in full swing, both at the factory and on the circuits, to make the most of the closing races to come.”

Anatoly Khavalkin was back in 4th position after the heats (+13 places), but his retirement in the Prefinal prevented him from claiming the Final victory and he finished 17th (+10 places). Rene Lammers faced a tough challenge after a technical problem in Qualifying. He regained more than 20 places in the heats and came close to the top 10 in the Final after an overall improvement of almost 50 places. Zac Drummond confirmed his attacking abilities until the Prefinal. 8th on the starting grid of the Final, the race did not go as planned and he was only 17th. Christian Costoya came close to a good result for his debut in OK-Junior. Unfortunately, a retirement in the Prefinal deprived him of a Final qualification this time.

Bruno Gryc started with a great 4th place in Qualifying. After a victory and a 2nd place in the heat, luck was not on his side in the Final stages and a cascade of setbacks dropped him back to 35th place. William Calleja kept up the pace after his 6th place in Qualifying and finished 7th with eloquent speed. Jack Illife shone in the heats with two wins and two 2nd places accompanied by three fastest laps. He was less successful in the Final stages and finished 9th. Angelo Bruno Blanco was very persistent and reached 15th position in the Final despite some hazards. Manuel Miguez Gayoso gained 16 positions in the heats and continued his momentum to reach 17th place in the Final with a total gain of 28 positions. Newcomer Billy van Staveren did very well and gained 23 positions in the heats. The Final stages were less favourable to him and he finally finished 28th. Finally, Alessandro Truchot’s distant 77th position in the Qualifying session made his mission difficult at the back of the field. His progression of 15 places in the heats did not allow him to reach the Final after a retirement in the Prefinal.