The first round of the FIA Karting European OK and Junior Championship, held at Genk from 13th to 16th May 2021, was the scene of intense sporting clashes. The changeable weather conditions during the Saturday heats were particularly difficult for the Parolin Motorsport drivers to cope with, despite the proven potential of the Parolin/TM Racing packages. James Wharton showed excellent competitiveness in OK, while Rashid Al Dhaheri and Enzo Deligny returned to the Final top 10 in OK-Junior.

“This second competition in Belgium was rather tough”, said Marco Parolin. “But thanks to the performance of our equipment and the competitiveness of our drivers, the balance of this beginning of the European Championship remains interesting. We are looking forward to meeting again in France in less than two weeks, on the Aunay-les-Bois circuit, to confirm our very high potential. In OK, James Wharton’s overall performance was very satisfactory and Alfio Spina’s debut in our colours was very promising. In OK-Junior, Rashid Al Dhaheri made a great comeback from his 25th in Qualifying by finishing 6th, while Enzo Deligny followed him in the top 10. Anatoly Khavalkin and Maksim Orlov should soon be able to get the results their talent deserves. We are also sorry that Guillaume Bouzar had so many setbacks during this meeting.”

Wharton on the rise

Young Australian driver James Wharton put in a remarkable performance in the OK category in a difficult situation. In the stormy weather on Saturday, he progressed in each heat with great determination. It is a pity that the last heat on Sunday morning did not enable him to continue his climb beyond 14th position. He made an excellent start in the Final and fought his way into the top five. He crossed the finish line in 7th position, a gain of seven places, before being demoted by a spoiler penalty.

Alfio Spina, a newcomer to the team, was quick to appreciate how his Parolin/TM Racing machine worked. He impressed with his 18-position gain during the heats, but an incident eliminated him from the fight at the start of the Final. Jesse Alejandro Carrasquedo Parada showed his speed qualities with a top five in the third heat, but he lacked the consistency to continue to the Final. Arnur Shabdar had a tough challenge and still needs to get used to this level.

Al Dhaheri and Deligny at the forefront of the Junior fight

Enzo Deligny confirmed his talent against the clock by taking 10th position in the Qualifying Practice. The heats were less favourable to him, in particular when he tried a risky gamble with the choice of tyres. Meanwhile, Rashid Al Dhaheri scored three top three finishes and made up 11 places in the heats. Both drivers made a good start in the Final, with Rashid quickly finding himself in a battle for the top five. Enzo joined him before the halfway point and they both maintained a good pace until the finish line despite the intensity of the battles, regaining eight places each. Al Dhaheri finished in 6th position while Deligny was 9th.

Anatoly Khavalkin had started well with his 13th place in Timed Practice, then his 5th position in the first heat. Unfortunately, he had to retire three times and was severely downgraded in the ranking. Maksim Orlov resisted adversity better, but his distant 52nd time did not allow him to reach the Final. Shimo Zhang also lost ground in the heats, while Guillaume Bouzar had the worst weekend of his career.

The successful start to the second half of the season 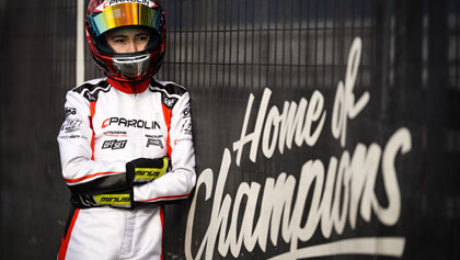 The organisation of the Champions of the Future by RGMMC in Belgium has certainly marked an important turning point in the 2021 sporting season. The first international competition of the year to leave Italian territory was accompanied by the discovery of the MG Tyres destined to equip all FIA Karting events, starting with the opener of the OK and Junior European Championship on the same circuit in less than two weeks. The harshness of the races at Genk did not always allow the Parolin Motorsport drivers to show the competitiveness of their equipment, but James Wharton’s comeback in the OK Prefinal and the 7th and 8th Final places for Rashid Al Dhaheri and Enzo Deligny in OK-Junior were a testament to the level of performance of the Parolin chassis, equipped with TM Racing engines.

“The Belgian weekend was not easy to manage, but we are very confident in the effectiveness of our equipment in these new conditions,” explained Marco Parolin. “The grip of the Genk track was not high compared to the Italian races at the beginning of the season. The MG Tyres also worked very differently to those we were used to before. We anticipated these changes and continued to work during the meeting, so we achieved a very interesting level of competitiveness. The last parameter to take into account is the unique track which caused several incidents during the race, especially at the start. This is definitely an important point to take into account when we prepare our drivers.“

Juniors already in the mix

All six drivers in the Parolin Motorsport team qualified for the Finals, which was not an easy challenge given the toughness of the races.

Maksim Orlov and Anatoly Khavalkin were making their return to OK-Junior with Parolin Motorsport after a slow start to the season. There were a lot of habits to learn for these two Russian drivers, but they showed their talent by coming back in the heats. Both qualified through the Repechage, continued to progress in the Final stages and reached 21st and 23rd positions respectively, a gain of over 30 places each.

Rashid Al Dhaheri took a heat win, in addition to two top three finishes and a fastest race lap. Despite a penalty in the last heat, he returned to the top 10 on Saturday evening. Enzo Deligny had a more consistent run, starting from 11th and coming back to 8th in the heats. Rashid and Enzo resisted well in the Prefinal before giving their best in the Final where they both regained five positions in the battle and finally followed each other in 7th and 8th places.

Kai Sorensen had done well in the heats, including two top fives, and had made up 13 places since Timed Qualifying. Unfortunately he crashed in the battle of the Prefinal and crossed the finish line 25th before being penalised. Guillaume Bouzar, consistently in the top 10 of the heats, regained another 10 places to 11th in the Prefinal before being eliminated at the start of the Final.

James Wharton showed great fighting spirit to regain nearly 20 places in the heats and more than 15 in the Prefinal. The Final was less favourable to him and he had to be satisfied with reaching the finish in 24th position before a penalty for a dropped spoiler. Jesse Alejandro Carrasquedo’s progress was confirmed on the demanding Genk track. Starting from an encouraging 12th place, the young Mexican avoided most of the race pitfalls to finish in 22nd position. Arnur Shabar, in his third OK event with Parolin, was not able to qualify for the Final stages.

Good results at the Margutti

Meanwhile, another part of the Parolin Motorsport team took part in the 32nd running of the Trofeo Andrea Margutti at the Lonato track. Slavik Putiatin set the 11th fastest time in KZ2, dropped back due to a retirement in a heat and then brilliantly came back from 22nd to 5th position in the Final stages.

In Mini, the poleman Christian Costoya dominated the beginning of the meeting, even in the rain. He finished his good performance on the podium in the Final. Matias Orjuela did not have the same speed against the clock or the same success in the heats. This did not prevent him from moving up 15 places in the Final stages to reach 7th position with the fastest lap in the race. Oliver Kinmark was consistent to finish 14th.