Parolin on the OK and OK-Junior podiums in Zuera 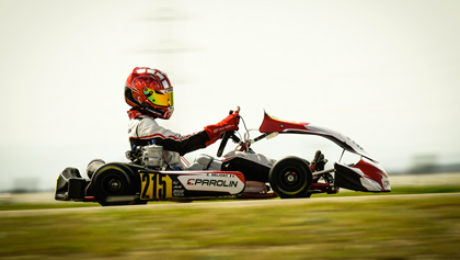 arolin Motorsport has just completed a difficult but successful meeting at the Spanish circuit of Zuera for the second round of the Champions of the Future Euro Series. In OK, Enzo Deligny made an incredible 34-place recovery with several fastest laps to reach the second step of the podium on his 14th birthday. The success of the Italian team was completed by the superb 3rd position of Anatholy Kkavalkin in OK-Junior.

“The competitiveness of our equipment in all the categories in which we compete is the reason for our sporting and technical commitment,” said Marco Parolin. “The first round of the European Championship held last week in Portimão proved that the team is on the right track. The results we have just achieved in Zuera at the Champions of the Future Euro Series are very satisfying in view of the next FIA Karting event. The TM Racing-powered Parolin chassis are proving race after race that they have earned their place as one of the best karts in competition today. Consistency at the top is a key factor and is one of our priorities while this exceptional level of performance allows all our drivers to progress more quickly. Anatholy Khavalkin and René Lammers were able to defend their chances at the top of the rankings, while Zac Drummond continues to make encouraging progress and Ghazi Motlekar has again qualified for the Final. In OK, Enzo Deligny managed the meeting perfectly despite the handicap of his 36th position in Qualifying. Everything is in place for him to win an important race soon. Maksim Orlov had a solid run despite some difficult battles. Our new recruit, Rohaan Madesh from India, really succeeded in his first steps in a very demanding international category.”

“We will be able to prepare for the second round of the European Championship in Zuera in a fortnight time on a solid basis thanks to the data recorded this weekend”.

11th in Qualifying, five top three in the heats including a win and a fastest time. 4th in the intermediate ranking and 3rd in the Final with the 4th fastest time. Moved up five places to 6th position in the provisional series ranking.

10 in Qualifying, 2nd place with the fastest time in a heat, 4th in the Super Heat and 13th in the Final. 9th in the provisional series ranking.

41st in Qualifying, 30th after the heats, 23rd in the Final, 18 places gained over the meeting.

36th in Qualifying, retirement in the first heat, then two 5th places, a 3rd place with the fastest time and 20 positions gained after the heats. Victory and best time in Super Heat (+7 pl), 2nd Final position, 12 places gained and fastest time. 8th in the provisional series ranking.

16th in Qualifying, fastest time in heat, but lost 10 places in the battles, 27th in Final. 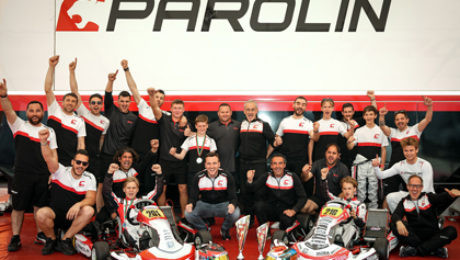 Parolin Motorsport has been working hard since the Champions of the Future Euro Series. The opening meeting of the FIA Karting European Championship at Portimão showed the significant increase in performance of the Bassano del Grappa-based team’s Parolin / TM Racing karts. Khavalkin and Lammers finished on the OK-Junior podium, while Deligny finished in the OK top six.

“Our ability to progress in less than two weeks confirms the strong potential of our equipment,” commented Marco Parolin. “The results of Champions of the Future were already very interesting and we fine-tuned our adaptation to the Portuguese track to start the European Championship in good conditions. Thanks to this, our drivers were more confident and they were able to give their best. I would like to congratulate in particular Anatholy Khavalkin and René Lammers for their very consistent performance in the OK-Junior class, which earned them a place on the Final podium and 2nd and 3rd place in the provisional standings. Zac Drummond’s rise to prominence should also be highlighted, as he finished in 15th position in his first season at this level. Enzo Deligny was also very competitive in OK as he was able to climb to 6th place in the Final.”

As selective as ever, the Portimão track benefited from good weather conditions throughout the weekend. The races were very sporting, despite the intensity of the battles, thanks to the vigilance of the FIA Karting officials. However, the competition was very tough with an extremely high standard.

René Lammers was very fast in the Qualifying sessions with a good 6th position among the 69 participants. Very consistent at the front of the heats, he took a victory and two 2nd places while achieving two fastest laps in the race. He was 4th at the end of the Super Heats. 8th in Qualifying, Anatholy Khavalkin won three heats and won Super Heat A which allowed him to join the top five. He quickly escaped along with the leader of the Final, whom he chased down relentlessly. He tried to take the advantage, especially in view of the finish, but in vain. In the meantime, Lammers moved up to 3rd place at mid-race, but the gap was too big for him to participate in the fight for the victory.

Zac Drummond put in his best performance by regaining nine positions during the heats. The young Scot was again very combative in the Final and achieved a very encouraging 15th place despite a penalty for a badly positioned front fairing at the finish.

In OK, Enzo Deligny was again very effective in the top five of the heats and confirmed his position in 3rd place of Super Heat B. He attacked from the start of the Final, passed successfully and finished 6th in his first European Final in a category where he is making his debut this year.

Champions of the Future will head to Zuera next weekend in preparation for the second round of the European Championship, which will take place there two weeks later.