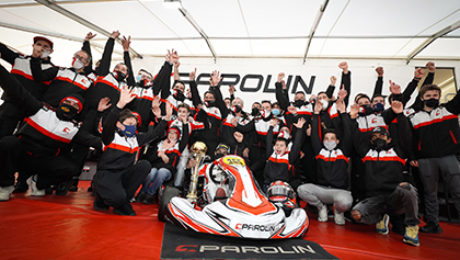 The Parolin Motorsport team played a major role in the WSK Champions Cup in Adria and intends to remain a strong team throughout the year. Competitive in all categories, the Italian team won the OK-Junior Final with the promising Emirati Rashid Al Dhaheri, while the return of an official Parolin-TM Racing team in KZ2 resulted in a remarkable performance by Francesco Celenta. In the icing on the cake, the Parolin chassis won in 60 Mini thanks to the Dutchman Rene Lammers from the Baby Race Academy team.

From the first race of the season, the Parolin Motorsport team confirmed its great international ambitions in 2021. Solidly supervised by high quality technical staff and equipped with perfectly developed machinery after hard development work over these last weeks, the drivers were able to give their best on the Adria International Raceway.

Rashid Al Dhaheri, a benchmark driver in Mini at the wheel of his Parolin-TM, has confirmed his promising debut in OK-Junior during the second part of the 2020 season. The young Emirati took the lead in the WSK Champions Cup after a sensational run in the heats (1st, 2nd, 3rd, 1st and 2nd). The rest of the competition confirmed his grip on the pack, with relentless domination both in the Prefinal and in the Final. 5th after the heats, 2nd in his Prefinal and 5th in the Final, the Russian Maksim Orlov was also brilliant in Adria, while the Frenchman Enzo Deligny (11th) completed the remarkable overall performance of the Parolin Motorsport team after a comeback of eight places! Luxembourg driver Guillaume Bouzar came back from 32nd to 23rd position. 3rd in his group in Free Practice, the American Kai Sorensen unfortunately didn’t succeed in Timed Practice.

OK: Wharton at the front

James Wharton and his team were not rewarded for their efforts in Adria, even though the competition had got off to a very encouraging start. The Australian placed 9th in the Qualifying Heats after a clear round (3rd, 7th and 4th). Wharton was even in 4th position at the beginning of the Prefinal, but the expected result flew away in the Final after a retirement in the opening laps. Still a Junior in 2020, the Italian Valerio Rinicella made a big impression by managing to get into the top five in one of the heats. Mexican Jesse Alejandro Carrasquedo has learned a lot for his debut in this difficult category. Finally, the Italian Danny Carenini and the Czech Jiri Becicka (Parolin Racing CZ team) had the honour of qualifying for the Final of this race which was at a particularly high level.

For his comeback in the Parolin Motorsport colours, Francesco Celenta was one of the most prominent drivers of the meeting, with two victories in the Qualifying Heats and a magnificent success in the Prefinal. He remained a contender for the podium in the Final for a long time, before crossing the finish line in 4th position after some fine duels that allowed the Italian and his team to look forward to an excellent 2021 season. The Parolin chassis designed for the gearbox categories also showed strong potential with Slavik Putiatin. The Ukrainian driver increased his power during the meeting. He came back to 18th in the Final, before dropping back seven places after a spoiler penalty.

60 Mini: What a comeback for Costoya!

The Parolin brand remains the reference for the youngest drivers. The Italian chassis was still the best represented of this magnificent line-up of 116 participants, in addition to taking three places in the top five in the Final. In addition to the victory for Rene Lammers (Baby Race Academy) and 5th position of Jan Przyrowsky (AV Racing), Christian Costoya Sanabria achieved a major comeback. Relegated to 113th position in Timed Qualifying due to a problem, he then gained 99 places during the weekend and took 4th place under the chequered flag with panache. Although the Swede Oliver Kinnmark wasn’t rewarded after several excellent performances in the heats, the American Matias Orjuela completed a fine competition in Adria, finishing in 13th position in the Final, up from 20th. As for the Lithuanian Simas Baciuska and the Italian Angelo Blanco, they are certain to improve their positions in the upcoming races.

Strengthened formation and programme for the Parolin Motorsport team 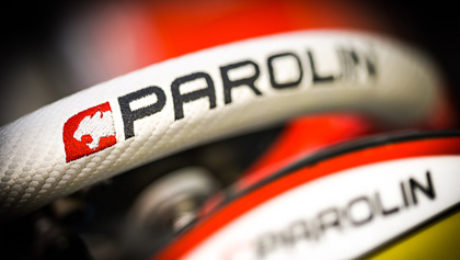 In the first change of 2021, the official racing team of the Parolin Racing Kart factory has changed its name to become Parolin Motorsport Srl, a racing team in its own right. After its numerous successes in Mini, OK-Junior and OK, Parolin will make its big comeback in KZ with strong ambitions. In total, this season the Parolin Motorsport team will include 18 drivers from 13 nations in the four international categories, while technical collaboration continues with the TM Racing factory.

“Parolin Motorsport Srl embodies our desire to play a leading role in all the international categories by highlighting the quality of our chassis,” explains Marco Parolin. “We launched our factory team in 2016 in the KZ category and then redirected towards the younger categories. In this way, we have contributed to training many promising drivers, starting with Mini, then OK-Junior and finally the OK. Now it is time to complete our sporting commitment in KZ. The search for the best performance is essential for a chassis manufacturer like us and an intensive racing programme leads us to constantly improve our products. It is also an absolutely irreplaceable tool for promoting our brand, on which our distributors all over the world rely.”

Mini: the racing school
An extremely competitive category for youngsters from 8 to 12 years of age, Mini has allowed Parolin to obtain many successes in the last few years while becoming a strongly represented brand. In 2021, Parolin Motorsport will rely on the recognised know-how of the Spaniard Christian Costoya, the American Matias Orjuela, recent winner of the Florida Winter Series, as well as the promising Swede Oliver Kinnmark. Rookies Angelo Blanco (ITA) and Simas Baciuska (LTU) will make their Mini debut.

Junior, the antechamber of champions
Several drivers who have trained with Parolin in Mini continue their course in OK-Junior. The UAE driver Rashid Al Dhaheri has already achieved a great 2020 season in Juniors, with a notable 2nd place in the Champions of the Future series in Portimao, continuing his success in Mini in the WSK Super Master Series and WSK Euro Series from the previous year. The Russian Maksim Orlov will race in his second season in the Junior category with Parolin. The American Kai Sorensen, winner of the Florida Winter Series 2021 in X30 Junior, and the Luxembourg driver Guillaume Bouzar remain loyal to Parolin, while the Frenchman Enzo Deligny will join Parolin Motorsport for his first full season at this level.

OK, the top category
An All Road Management driver recruited by the Ferrari Driver Academy, Australian James Wharton continues to rely on Parolin on his way to the top. For his third year with Parolin, Italian Valerio Rinicella will continue in OK after his good progress in OK-Junior last year as top rookie in the European Championship and 4th overall. An experienced and talented competitor, the Italian Danny Carenini will join Parolin Motorsport in OK, having won the Italian Championship in X30 in 2020. The Mexican Jesse Carrasquedo, a member of the Sergio Perez Academy, will be competing in his fifth season with Parolin and making his debut in OK alongside rookie Arnur Shabdar from Kazakhstan.

A strong return to KZ
Italian Lorenzo Travisanutto, who joined the Parolin team last season, will race a gearbox kart for the first time after having won many prestigious titles in OK. A driver recognised both in Italy and internationally, the Italian Francesco Celenta will return to the Parolin chassis that had already enabled him to shine in 2014 and 2015. This time, he will be part of the official team and he is not hiding his ambitions for victory. Finally, the Ukrainian Slavik Putiatin is looking to realise his potential for success after his numerous achievements in KZ2.

The WSK Promotion events are part of Parolin Motorsport’s 2021 programme, as are the preparatory races of the Champions of the Future series, before taking on the challenges of the FIA Karting European and World Championships.