A promising World KZ for Parolin 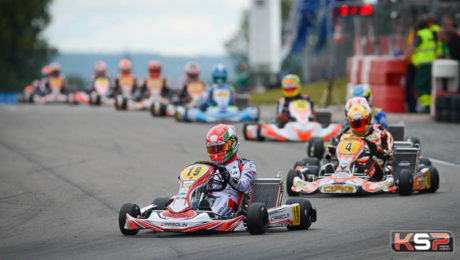 The final result of the 2016 World KZ Championship does not reflect the overall performance of the Parolin Racing Team during the competition at Kristianstad. Lorenzo Camplese was equal to the top names in the premier class of karting throughout the Swedish weekend, with remarkable consistency for his first participation at this level. Parolin Racing has completed the CIK-FIA international season on an extremely positive note, further motivating the Italian brand to increase its efforts in racing.

“We are very pleased with our first season at the highest level in KZ,” said Marco Parolin after the Kristianstad evening. “We have demonstrated throughout the year that our chassis was capable of competing with the best, even though the team was making its debut in KZ against very experienced competition. Our driver Lorenzo Camplese was able to fight at the front during a very tough World Championship in Sweden. It means a lot to us and to all those who trust us. What is certain is that we will not stop there!”

Camplese never left the top five until the Prefinal. From Qualifying onwards, he set the 3rd fastest time, beating the already increased number of champions on the entry list. The qualifying heats confirmed the speed of the Parolin chassis, as he was in the top three on Saturday night with successive extremely fast laps. After his beautiful 5th place in the Prefinal, Camplese made an excellent start in the first few laps of the Final and took 2nd position. He then lost a few places as the intensity of the struggle for the victory reached its height.

“The Kristianstad competition will remain engraved in my memory,” explained Lorenzo. “I have never had the opportunity until now to use competitive equipment. It was like a dream. The team has done a great job. While we’re all a little disappointed to have been only classified 13th due to a penalty, but that’s racing and it’s fine. We have progressed throughout the season and we are all very motivated to go even further. Parolin Racing has demonstrated that it fits right in among the best!”

Before planning 2017 with and a more developed ambitions and structure, Parolin Racing will compete in the famous Las Vegas Supernationals in November, an extraordinary event where the qualities of Parolin chassis will again have the opportunity to shine.