Parolin Motorsport one step up in Zuera 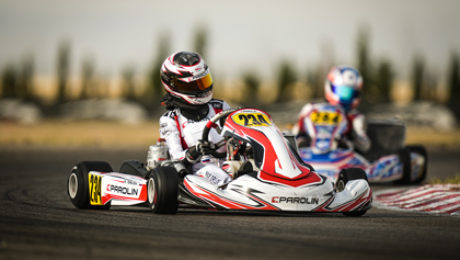 Within a week of each other, the progress of the Parolin Motorsport team has been very clear between the Champions of the Future and the last round of the European Championship which has just ended in Zuera. The rising stars of the Italian factory benefited from even more competitive equipment to assert their talent at the highest level. In the Junior class, Orlov took another podium, Al Dhaheri finished in the top five and Spina showed his strong potential in OK.

“It was a very positive weekend,” explained Marco Parolin. “Our drivers learned from the previous competition and our technicians fine-tuned the equipment. The races were as intense as ever on the Spanish circuit and we are proud to have obtained more conclusive results. Maksim Orlov had even more merit to reach the Junior podium, while Rashid Al Dhaheri reached the Final top five with the fastest lap in the race. Anatoly Khavalkin was also more consistent. In OK, Alfio Spina is definitely a great asset for the team. He has made excellent progress into the European top five. I’m delighted that Brando Badoer was able to develop in this way and that James Wharton made a very convincing comeback.”

Maksim Orlov had an even more exciting race this weekend. He started 42nd and made up 25 places during the heats, including a 3rd place with the fastest lap. His ease in the battle of the pack was a pleasure to see. After a superb start in the Final, he kept on progressing towards the front before joining the top three during a legendary last lap, totalling a gain of 14 places. At this level, it is a great demonstration.

Rashid Al Dhaheri was back to his best during this very strong weekend. He finished his heats with a 2nd place and then a victory that put him in the top 10. Determined, he came back quickly to the top five of the Final, continued to fight until the end to finish 5th and took the fastest lap in the race.

Anatoly Khavalkin also did very well in the heats starting from the middle of the grid. He was 5th in the last heat with the fastest lap. A heavy penalty sanctioned his fighting spirit and delayed his return to the top of the table. Unleashed, he started like a rocket in the Final and had regained 15 places in a few laps when a collective collision put an end to his ambitions. Amongst the other Junior drivers of the team, Nicolas Ambiado confirmed his amazing potential by moving up 37 places during the heats after having been sanctioned during Qualifying.

Despite an average time in Qualifying, Alfio Spina put in a very good performance in the heats, making up 20 positions to enter the top five. He was 3rd in the Final on the first lap, but then dropped back during some tough battles, although managed with a lot of determination to get back to 8th place, his best result at this level.

Brando Badoer had a very encouraging run with efficient heats that allowed him to regain many places. His great fighting spirit in the Final allowed him to move up to 15th position despite being behind in the first three laps under yellow flags. James Wharton made up for his poor Qualifying position by regaining 16 positions during his heats and made another impressive 15-place recovery in the Final to finish 19th.

Orlov on the podium in Zuera 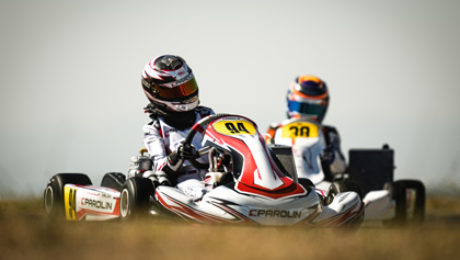 After the superb performance of Anatoly Khavalkin last week in Sarno, another Parolin Motorsport driver caused a sensation in OK-Junior this weekend in Zuera as Maksim Orlov brilliantly finished 3rd in the Champions of the Future series. Rashid Al Dhaheri also performed well, finishing 8th in the Final race, while Alfio Spina was fighting for the top 10 in OK despite a difficult weekend. This eventful weekend confirmed the ability of the Parolin / TM Racing karts in both categories with a week to go before the conclusion of the European Championship at this same circuit.

“We are very pleased with Maksim Orlov’s result”, said Marco Parolin. “He has been making great moves for a few races now without being able to put them into practice. This weekend everything went well for him and he was able to exploit the potential of his machine until the end. An international podium finish is an important moment for any driver. Rashid Al Dhaheri was also consistent in a very competitive environment and we are delighted that he was able to finish in 8th place. Alfio Spina was well on his way to a good run and he deserved to be fighting at the front in the Final stages. We are confident in our potential and we are ready to face the end of the European Championship next weekend positively.”

Maksim Orlov put in a string of top performances throughout the meeting. 19th in Qualifying, he progressed to the top 10 in the heats and continued with a comeback to 3rd position in the Prefinal. He then confirmed this by consistently fighting his way into the top three in the Final. His presence on the podium was a fitting reward for his efforts and talent.

Rashid Al Dhaheri’s Final result only partially reflects the energy he spent to get there. He had gone some way in the heats to make up seven places, but his nine-place climb in the Prefinal was crucial. He continued to fight valiantly in the Final to finish 8th. Anatoly Khavalkin had started too far back to make up for his two retirements in the heats. His 21-place recovery during the Repechage proved his great speed.

The Chilean driver Nicolas Ambiado was able to regain 28 places with a good consistency during the heats, but it was not enough to open up access to the Final phases. His other team-mates did not often experience the conditions required to allow them to overtake their delay in Qualifying.

Strong potential for Spina in OK

Alfio Spina has strong competitiveness in OK and he proves it in every race. 9th in Qualifying meant he had the necessity of maintaining the pace without a costly retirement in a three heat format. He nevertheless managed a good Prefinal at the edge of the top 10 with a progression of eight places before having to be satisfied with 16th in the Final. Brando Badoer had more difficulties in the battles before finishing 20th. James Wharton had made up eight places in the Qualifying Heats, but his retirement from the Prefinal after making up 10 places halfway through the race did not work in his favour.

Khavalkin a revelation in Junior, Spina confirms in OK 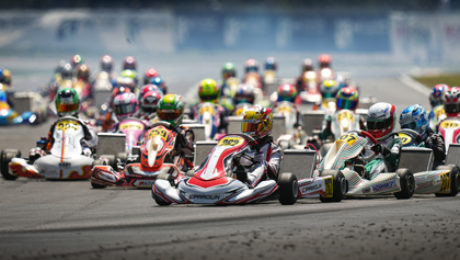 Following on from his excellent performances in the WSK Euro Series, Anatoly Khavalkin had a remarkable run at the front of the third round of the FIA Karting European Championship on the Sarno circuit. Overall, the entire Parolin Motorsport team performed very well in the Neapolitan heat despite the tough sporting clashes that took place at all levels. The Parolin / TM Racing teams are now among the best in both the OK and OK-Junior categories.

“After a sometimes confusing Qualifying Practice, all our drivers made significant progress during the competition,” said Marco Parolin. “We are particularly pleased that Khavalkin was able to follow through on the great potential he showed on the Sarno circuit in the WSK Euro Series. He deserved his 4th place in OK-Junior and even better after his demonstration in the heats by climbing from 13th to 1st position. I think this competition marks an important step in his career. Al Dhaheri also performed well, but his Final was more complicated. We now have two top drivers to defend the team’s chances in OK-Junior. We are delighted to have Brando Badoer back with us. This young man has great potential and we will do everything to support him in his quest for victory. We are building up our strength in OK with the rise of Spina alongside Wharton and the rest of the season looks very interesting.”

Khavalkin, the hero of Sarno

Russian youngster Anatoly Khavalkin has made rapid progress since moving up to Junior at the beginning of the year. Very fast, he has now integrated all the parameters to go for rewarding results. At the European round in Sarno, he had some exceptional runs in the top three with a fastest lap and two wins. He started at the front of the Final and battled with the best with great perseverance to finish 4th.

Rashid Al Dhaheri put in four good runs out of five to come back to 8th position with a gain of 11 places. He fought hard in the Final, but a contact caused him to drop back and he finished only 15th.

Spina finishes on a positive note

Italian Champion Alfio Spina was 24th in Qualifying and improved his position in the heats, moving up to 13th despite being dropped in the fight. He confirmed his international competitiveness with a superb gain of seven positions in the Final to conclude in a very rewarding 6th place. The Australian James Wharton gave his best in the Final by taking nine places to finish 12th. Brando Badoer started his return to Parolin with a very good time in 6th place out of the 62 OK entries. The young Italian suffered slightly in the heats but made up for it in the Final with an 11 place improvement to 13th.

With a very good potential in both categories, Parolin Motorsport is now heading to Spain to compete in the Champions of the Future series at the Zuera circuit next weekend as a prelude to the last round of the European OK and Junior Championship which will take place the following week.