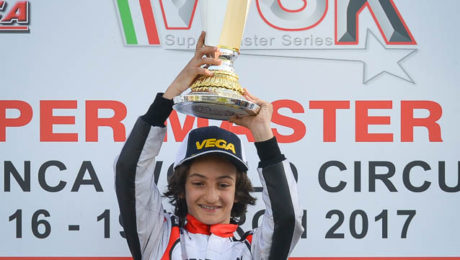 As spring approaches, international kart racing is seeing a weather situation more in line with the standards of the discipline. The Parolin Racing Kart team was able to perform very well during the third round of the WSK Super Master Series. To the excellent performance of Camplese among the best in KZ2, was added the well deserved victory for Gabriele Mini in the youngest category.

“Until now, we have not had the opportunity to demonstrate the breadth of our knowledge this year,” Albino Parolin pointed out. “We were confident in the quality of our equipment and the strong potential of the team, but that had not yet been reflected in our results. At La Conca, we have taken an important step towards our objectives. The development continues and we have other strong cards to play in the near future.”

The circuit of La Conca is unique. In addition to the temperature of around 20°C in the region, the surface of the track can baffle competitors with the very strong grip it generates. The Parolin Racing Kart team was not at all destabilised by these unusual conditions, and the chassis of the Bassano brand was reacting perfectly to the different settings. Shihab Al Habsi’s OK-Junior progress was unfortunately affected by several clashes that tarnished the record of the weekend, despite the interesting performances that the young Omani has achieved when he didn’t suffer any setbacks.

Unnerved until then by the wet circuits of the 2017 WSK Super Master, Lorenzo Camplese found his smile in the grip of La Conca. Early season efforts were rewarded with flattering results, although a mechanical problem prevented him from completing the demonstration in the Final. With 3rd in KZ2 Qualifying, a best lap in the race, heat finishes between 2nd and 4th place and a top five in the Prefinal, Lorenzo was well on his way to a great Final because he had already taken five positions when his engine broke down. Thanks to the level of performance displayed throughout the weekend, satisfaction has prevailed nevertheless.

A contender in 60 Mini since the first races of the season, Gabriele Mini finally got the victory that he deserved. Once again on pole position and the undisputed leader of the qualifying heats, the young factory Parolin Racing Kart driver fought until the end of the final stages to reach the first step of the podium that he coveted so much, and shared the joys with the whole team. He moved back to 2nd place in the championship, very close to the leader.

More motivated than ever, the Parolin Racing Kart team is set to arrive at the Sarno track with solid assets for the finale of the 2017 WSK Super Master Series.

Encouraging performance at Castelletto despite the weather 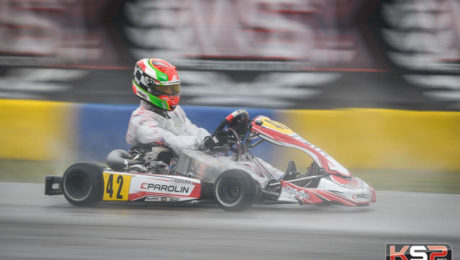 On the track at 7 Laghi di Castelletto, the second weekend of the WSK Super Master Series again thwarted the Parolin Racing Kart team’s objectives. However, there have been good performances already to the credit of the Italian team whose ambitions remain very high for the 2017 season.

“The results of this WSK Super Master round are not really in line with our ambitions, but the level of performance of our chassis is already very encouraging,” Albino Parolin commented. “We saw that Camplese could be very fast in KZ2, while Mini went well in 60 Mini. Al Habsi is making good progress in OK-Junior and he put in some good performances this weekend. We all look forward to getting out of these winter conditions to see more representative races. The team has not yet reached its cruising speed, and arrival of new drivers will allow us to develop our already competitive equipment.”

Not yet very comfortable in the rain with the new Bridgestone tyres, Lorenzo Camplese (KZ2) showed excellent speed as soon as the track dried. Even though the level of grip was never exceptional, he already gained 12 positions in the last qualifying heat on Saturday while achieving the fastest lap of the race. On Sunday, he assured his qualification in the Prefinal before exploiting the full potential of his Parolin / TM in the Final. Thanks to his performances that were very close to those of the leaders, he managed to regain no less than 14 places to finish 13th in the race, making him the driver to achieve the most number of passes in the Finals while maintaining an extremely fast pace throughout the race. He set his fastest time on the last lap, demonstrating the effectiveness of his equipment over the long term.

The young driver from Oman, Shihab Al Habsi, has courageously faced weather conditions that are a very long way from those of his country. Only 47th on a very slippery track, he progressed despite the intensity of the fighting in the qualifying heats and his Parolin / Parilla was in the top 10 several times. With combativeness, Shihab managed to qualify and ranked 28th in the Final despite a motor problem that prevented him from getting a better result.

In the very competitive category of 60 Mini, Gabriele Mini again sparkled at the wheel of his Parolin / TM. He took pole position in the timed practice among the 79 participants, then dominated the qualifying heats with three wins and two fastest laps. 3rd in his Prefinal, he climbed up two places in the Final to finish 4th. Gabriele is therefore close to the leaders in 4th position of the Championship.

Parolin Racing Kart is looking forward to the next round of the WSK Super Master Series at La Conca on March 18th and 19th, to better reveal its potential.