Good preparation for Europe at Zuera 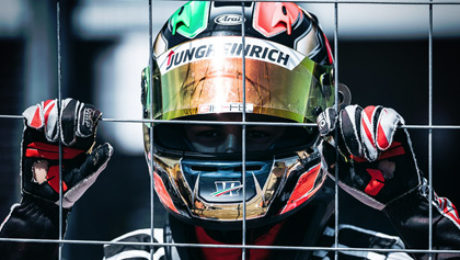 Parolin Racing Kart travelled to Spain with seven drivers to take part in the first round of the new Champions of the Future series at the Zuera circuit. The performance of the official Parolin-TM Racing karts with LeCont tyres in the same conditions as the next FIA Karting European Championship – OK & Junior was convincing, two weeks before the European grand opening.

“This meeting was an important test for us“, explained Marco Parolin. “On a technical level, we showed that we were perfectly in tune. Morgatto took 9th place in OK and we set two fastest laps in the heats. In the Junior class, Rinicella made a great comeback in the Prefinal and also set the fastest time. That said, this competition was not easy for our drivers. The Zuera track is unique and they had to find their feet while the races were full of incidents. It wasn’t easy to get a good result, but I’m sure it was a good experience for all of us.”

The team’s top-ranked driver in OK Qualifying, James Wharton showed his worth in the heats by finishing 4th, 5th and 3rd. Unfortunately, a technical problem on the first lap of his third heat nullified his efforts. He was sent back to the end of the grid at the beginning of the Prefinal and started his comeback in the Final when another incident destroyed his hopes. Matheus Morgatto started from 25th position in the Timed Qualifying session and was able to count on very good speed in the heats to regain ground and kept improving until he finished 9th, a very encouraging 16-place overall gain. Finland’s Henri Sääskilahti was making his comeback after the Winter Cup with some interesting performances in the heats. He regained 21 places up to a rewarding 17th place in the Prefinal, but did not complete a lap in the Final due to an incident in front of him.

Valerio Rinicella was able to congratulate himself on his performance in OK-Junior. Delayed in his heats, he qualified by winning the second chance heat. He competed in a magnificent Prefinal where he regained 13 places while being the fastest on the track. His great performance ended in 15th place in the Final. Maxwell Dodds remained a little bit behind his usual performance in 22nd position in the Final stages. Giovanni Trentin came back from a modest 37th Qualifying position, but two positive heats out of four with a retirement due to a jostling on the second lap of the Repechage didn’t allow him to reach the Final stages.

In the Mini class, Maciej Gladysz was discovering Zuera’s very fast track and MG tyres. Less at ease during the Qualifying heats, he regained his fighting spirit in the Final by finishing 5th. 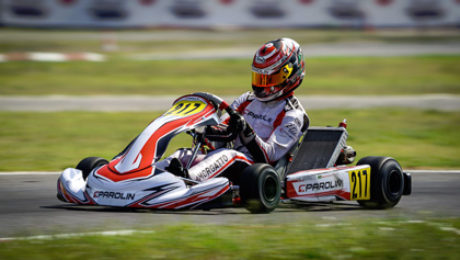 The second event of this return to competition confirmed Parolin Racing Kart’s excellent level of performance in all three categories at the opening of the WSK Euro Series in Sarno. Morgatto’s new top five in OK and Bouzar’s 4th place in Mini are proof of this, but several racing incidents ending in retirements did not fully reflect Parolin’s form during this heated competition.

“We can’t help but feel a certain amount of frustration after the Sarno meeting,” said Marco Parolin. “Having to face seven retirements in total, four of which were during the Final stages of an event, is always difficult to live with, especially when it comes to racing incidents… We knew we were in a position to achieve some very good results this weekend, but fate decided otherwise. Luckily, we didn’t come away empty-handed as two of our drivers reached the top five, in OK and Mini. We are looking forward to further success next weekend in the Champions of the Future series at Zuera.”

The temperature was once again high, over 30°, on the Circuito Internazionale Napoli from 9th to 12th July 2020 for the first round of the WSK Euro Series. On this fast and demanding track for both equipment and drivers, the competition was fierce, sometimes too fierce, which did not do Parolin Racing Kart any good.

In OK, Brazilian Matheus Morgatto shone once again, climbing another six places in the Final to enter the top five after setting the 14th fastest Qualifying time. The Australian James Wharton’s progress was more complicated and he had to retire at the very beginning of the Final. For his comeback, the German Hugo Sasse followed a sensible strategy that took him up to 13th place in the Final after regaining 10 positions.

Neither Valerio Rinicella nor Maxwell Dodds were able to reach the finish in OK-Junior. The Italian managed to qualify with a good 6th place in the Prefinal before losing all hope at the start of the Final. For his part, the Briton had reduced his Qualifying deficit well during some very combative heats, in which he valiantly climbed back from 10th position in each heat at an impressive pace. He was back in 4th position in Prefinal A when he had to drop back three laps from the goal, which forced him to start from the back of the grid in the Final.

After setting the 2nd fastest time, and very solid in the top three of the Mini heats, Polish driver Maciej Gladysz could not qualify because of a collision that delayed him on the second lap of Prefinal A. Fortunately, Frenchman Guillaume Bouzar was able to take over for Parolin with a convincing weekend that ended with nine places regained and 4th in the Final.

“I would like to pay tribute to the memory of Claudio Flenghi who passed away on Sunday morning”, concluded Marco Parolin.  “Everyone knows the attachment of Parolin Racing Kart to TM Racing. With his sportsmanship and fighting spirit, for us Mr. Flenghi embodied the spirit of racing. He is a personality that we miss already and we empathise with the sadness of his family and close friends.”