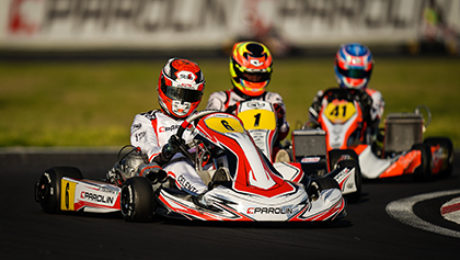 The new Sarno track is still very fast, but it was a big change from the old Neapolitan track and again provided the setting for some tough battles. The Parolin Motorsport team confirmed its rise to prominence in KZ2 with the sustained presence of Celenta in the front ranks and Wharton’s convincing debut in this elite category. Deligny finally registered his name among the best Juniors while Costoya and Orjuelas confirmed their roles at the front of Mini.

“In Sarno we were deprived of three major elements,” explained Marco Parolin. “Valerio Rinicella and Rashid Al Dhaheri tested positive for Covid-19 and could not leave home, while Kai Sorensen had to pull out, not yet recovered from his injured ribs after La Conca. We are also very proud of Enzo Deligny’s progress under our colours. He proved his worth with an excellent meeting that ended in the top five of OK-Junior. We have two reasons to be satisfied in KZ2 with Francesco Celenta’s top performances until his incident in the Final and James Wharton’s quick adaptation to the gearbox kart. Parolin Racing Kart was still the number one manufacturer for Mini chassis with five of them in the Final top eight. Christian Costoya still leads the championship and Matias Orjuela moved up to 4th place, while Simas Baciuska reached 15th position in the Final.”

With a victory with the fastest lap in his last heat, 3rd in his Prefinal and fighting for the Final top three before a collision, Francesco Celenta is definitely one of the protagonists of the category. Parolin also enabled James Wharton to succeed in his first competition in KZ2, as the young Australian progressed steadily until he finished 11th with a gain of 10 places in the Final. Slavik Putiatin, who climbed six places to 11th in his Prefinal, had to retire on the second lap of the Final.

Deligny takes over in Junior

Enzo Deligny, who finished 5th among 80 participants, took another step forward this weekend. He was in 2nd position after the heats and won his Prefinal. He fought brilliantly until the end of the Final to add a first top five to his list of achievements. Guillaume Bouzar and Nando Weixelbaumer did not qualify for the Final.

Still fighting for victory in Mini

With three heat wins and a best time, Christian Costoya started strongly. The Spaniard won his Prefinal and fought for the lead in the Final. The epic battle of the last lap saw him drop to 8th place, but he retained the lead in the championship standings. Matias Orjuela gradually recovered from Qualifying with solid heats. 5th in his Prefinal, he made up another three places in the Finals to finish just outside the top five. Simas Baciuska achieved the feat of regaining 11 places in the Prefinal and finishing on a positive note in 15th position in the Final. Finally, Oliver Kinmark made a spectacular comeback to 3rd place in the heats, but was unable to make it into the Finals.

The Parolin Motorsport OK team was held back by distant positions in Qualifying and only Danny Carenini’s progress in the Prefinal allowed them to reach the Final. Jesse Alejandro Carrasquedo and newcomer Mario Schettino missed their target in the Prefinal. 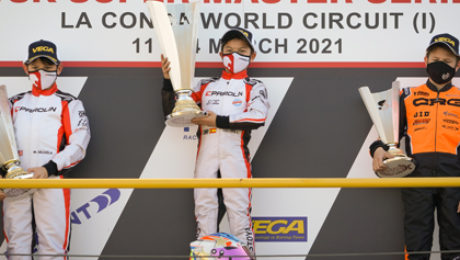 The second round of the WSK Super Master Series took place in the south of Italy at La Conca, a circuit renowned for its high grip. Costoya and Orjuela had a great duel in the Final stages which ended in a double win for Parolin Motorsport. In contrast to OK, there was no shortage of performances in OK-Junior. Al Dhaheri played a leading role, but could not defend his chances until the end, while Deligny reached the Final top 10 before being penalised.

“The track of La Conca is very special with a surface that gives a lot of grip,” explained Marco Parolin. “These conditions are very different from usual and not all the drivers are able to give their maximum in this configuration. The double win for Christian Costoya and Matias Orjuela in Mini is even more valuable for us as it shows how well our chassis can perform on all terrains, and the presence of four Parolins in the Final top five confirms our competitiveness. This is the third consecutive success of one of our chassis in Mini, while Parolin was the second most represented brand this weekend, all categories included. Very effective in OK-Junior, Rashid Al Dhaheri unfortunately retired in the Prefinal while Kai Sorensen, also very fast, was involved in an incident. Enzo Deligny was well up to 9th place in the Final before receiving a penalty.“

Christian Costoya’s fighting spirit paid off, as he gained 18 places during the heats before setting the fastest time in the Prefinal and then finishing with a victory in the Final. Matias Orjuela confirmed his strong potential and consistency by finishing 6th in Qualifying and then taking the lead in the heats with three wins. In the Final stages he was twice beaten by Costoya, who was formidable in the final metres. Both drivers made a jump in the overall WSK Super Master ranking with Costoya taking the lead and Orjuela coming back to 5th position. The other two Mini drivers in the team also qualified for the Final, with Oliver Kinmark moving up 10 places to finish 19th and Simas Bacisuka moving up six places to 27th.

Deligny in the Junior top 10 on the line

Rashid Al Dhaheri didn’t take long to adapt to the grip of La Conca. 16th against the clock, he took three top fours in the heats and regained nine positions, in 7th on Saturday evening. He was 5th in his Prefinal before having to retire on the last lap.

Enzo Deligny was the only one who could compete in the Final. Consistently, he came back to 9th in his Prefinal and made up another eight places in the Final by crossing the finish line in 9th position. A penalty caused him to drop back. Although he started well, Kai Sorensen had to deal with several problems in the heats and was forced to retire on the first lap of his Prefinal. Guillaume Bouzar was 39th in Timed Practice and was unable to qualify for the Final.

The Parolin Motorsport drivers had a Qualifying session that was too far off to make an easy return to the top of the ranking. Valerio Rinicella however reached the top three in his last heat. He set good times in the top ten, before ending the meeting in 21st position. Jesse Alejandro Carrasquedo managed to make up 12 places in the heats and made up some ground by finishing 25th in the Final. James Wharton also made up some ground as he came close to the top ten in his Prefinal, but his Final race was finished after just three laps.

Parolin Motorsport is now preparing for the third round of the WSK Super Master Series which will take place in a fortnight near Naples, and will also be attended by the KZ2 karts.

Another victory and improved performance in Adria in WSK Super Master 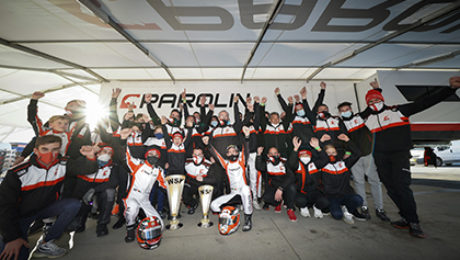 A week after the WSK Champions Cup, the Parolin Motorsport team completed an even more satisfactory event during the opening round of the WSK Super Master Series on the circuit of Adria. With an even larger, and even tougher field, the official Parolin drivers scored very consistent results. Al Dhaheri took a second victory in OK-Junior, Celenta mounted the KZ2 podium, and several Mini drivers had the opportunity to shine.

“There are many reasons to be satisfied at the end of this second weekend of competition in Adria,” declared Marco Parolin. “We have increased the general standard of our performances in every category, even though some of our drivers started their season this weekend. The technical potential is there and our work between the two meetings has already allowed us to take better results. Rashid Al Dhaheri put in a superb winning performance in the Junior class and Francesco Celenta was very consistent at the front of the KZ2 class against the top specialists. In the Mini, five Parolin chassis were in the Final top 10, with 1st and 2nd places. Christian Costoya showed excellent competitiveness that would have deserved to be rewarded with an even better result in the Final. We are determined to continue in this positive way in a fortnight’s time at the next WSK Super Master meeting in La Conca.“

The performances of the Parolin / TM Racing karts were very convincing in view of the European KZ Championship that will start in Adria in May. Francesco Celenta took a victory in a heat and set two fastest lap times, and he was again the fastest in the Prefinal before moving up to 3rd place in a very competitive Final. The youngster Slavik Putiatin confirmed the speed of the drivers by maintaining a good rhythm and regaining 15 places in the Final.

The results showed a progression with a very positive comeback for Valerio Rinicella up to 13th position in the Final, whereas Danny Carenini took 24th place and Jesse Alejandro Carrasquedo qualified in 26th position. James Wharton wasn’t spared from issues and was forced to retire in the Prefinal. For his first race in OK Arnur Shabdar was not far from qualification.

Already a winner the week before, Rashid Al Dhaheri was even more dominant this weekend. Victorious four times in the heats, he won his Prefinal and the Final by a large margin, being each time the fastest on the track. The 32nd Qualifying time for Enzo Deligny didn’t prevent him from finishing very close to the top 10 in the Final, with a progression of nearly 20 places during the meeting. After some difficult heats, Kai Sorensen was able to raise the bar up to 25th position in the Final with a gain of 15 places. Maksim Orlov, who made a strong comeback of 22 places in the heats, didn’t have the opportunity to make any progress in the Final stages, nor did Guillaume Bouzar who had nevertheless regained 21 positions. A driver moving up from 60 Mini, Nando Weixelbaumer was discovering the high level in the Junior category this weekend.

Performances at all levels in the Mini

Christian Costoya once again made his mark with four victories and two fastest laps in the heats. A complicated Final didn’t allow him to do any better than 8th among the 116 participants. Matias Orjuela was also twice the fastest in the heats with a fine consistency in the top four. It was a pity that he wasn’t able to take advantage of his 8th place in the Final until the end of the race. Oliver Kinnmark wasn’t rewarded for his efforts from 18th position on the starting grid of the Final. Simas Bacisuka fought with energy in the Prefinal for the pleasure of competing in the Final.