Parolin at the top more than ever as spring approaches 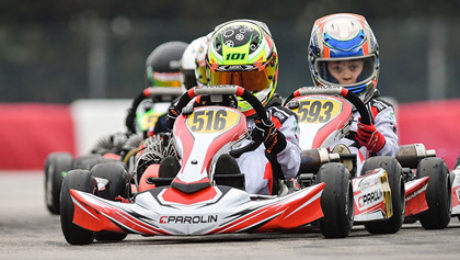 Temperatures rose considerably in Southern Italy during the second round of the WSK Super Master Series. The strong grip of the La Conca track was the second most important parameter of the 17th and 18th March event. The Parolin Racing Kart chassis have continued to show great potential in these new conditions that foreshadow the rest of the season. In OK-Junior as well as in 60 Mini, the Parolin drivers were among the fastest of the weekend.

Although he would have liked the performances of his drivers to be rewarded with victories, Marco Parolin welcomes the operation of his chassis on the demanding layout of Muro Leccese.

“We proved that we were still very competitive when temperatures began to rise. Moreover the grip was particularly strong this weekend, probably the highest of all this season because of the specific surface of the track of La Conca. Here, it is not possible to be in the game without good equipment. As such, the meeting was very positive.”

“We achieved two pole positions in Mini and Junior, winning many heats and posting several best laps in the race, including the two Finals. The victory has eluded us this time, but we know the toughness of the competition and we know that we will have the opportunity to catch up. Nevertheless, the package that we gave our drivers allowed them to best express their talent. As proof, 14 of the 34 finalists of the 60 Mini had trusted our brand!”

Stenshorne leads WSK 60 Mini
After two out of the four races, Martinius Stenshorne is still one of the big favourites of the WSK Super Master Series in 60 Mini, where he is ranked first. At La Conca, he won three indisputable victories in the heats, but an engine problem sadly pushed him back to 16th. His superb recovery to the second step of the podium, with the fastest times of the Prefinal and the Final,says a lot about the potential of the young Norwegian on his Parolin.

After the best Qualifying time in front of 74 opponents, Akshay Arjun Bohra made his debut among the best at La Conca. He confirmed his form by staying in the leading group during the heats and battled for 4th position in the Final, the most contested position, until two laps from the finish. Nikita Andreas Johnson made a name for himself by setting the third fastest time and winning his first Qualifying Heat.

Gabriele Mini constantly at the front in Junior
His consistency and presence among the top OK-Junior drivers in 2018 would make us almost forget that Gabriele Mini has just joined this category after a 2017 season mainly devoted to 60 Mini. The grip of the track did not affect his performance level as he began by taking pole position in Qualifying. He fought with a lot of energy in the heats and was still in 2nd place on Saturday night. The intensity of the struggles in the final stages did not allow him to progress as he deserved, but he still scored the fastest lap of the Final where he finished 6th. This allows him to maintain his chances in 3rd place overall.

The courage of Alessandro Cenedese must be emphasised as the young Italian did everything to perform well despite a significant fever.

The entire Parolin Racing team is actively preparing for the two successive Sarno rendezvous at the end of the WSK Super Master Series before starting the CIK-FIA European Junior Championship at the foot of Vesuvius at the end of April.