Travisanutto on the KZ2 podium in Adria 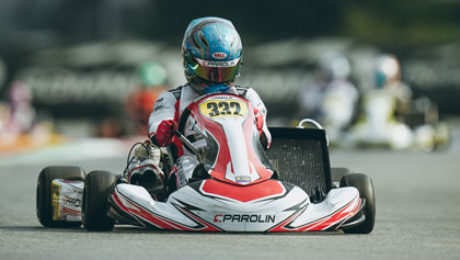 The second round of the European KZ & KZ2 Championship saw the Parolin Motorsport drivers demonstrate the effectiveness of their TM Racing-powered Parolin chassis in both classes. Lorenzo Travisanutto showed steady progress and finished on the KZ2 podium after a strong Final 10-place gain with the fastest lap, while Francesco Celenta, also the fastest in the Final, also made up ground to finish 7th in KZ.

“We were very pleased with Lorenzo Travisanutto’s development,” said Marco Parolin. “Although he is still a novice in gearbox karts, he has quickly gained confidence in his equipment and is already among the best in the KZ2 category. He set four fastest race laps during the meeting and his sense of attack was excellent. This is extremely positive for the whole team. James Wharton was unfortunately delayed several times by penalties, which prevented him from reaching the Final. We also had Angelo Lombardo with us this weekend. He was in need of racing but was increasingly competitive. Finally, Francesco Celenta set the fastest time in the KZ Final and moved up 10 places, which is also a good sign.“

The high temperatures that reigned in Adria complicated the work of the drivers and the technicians, as well the tyre management, which was not without some problems. The races were very competitive with very few incidents during the whole competition.

In contrast to the first European event, Lorenzo Travisanutto put in solid runs from his 14th position in Qualifying, which allowed him to start the Final in better circumstances. He was again at his best in the Final race, which was by far the longest. His ability to maintain a high pace over time was remarkable. He set the fastest lap with two laps to go and gained 10 places on a circuit known for not favouring overtaking in this category. Reaching the podium is a great reward for the driver and his team.

James Wharton was very disappointed not to find the same level of performance in Qualifying that he had in Free Practice. Whatever the explanation, he found himself 48th with the task of making up places in the field. Two penalties impacted on his progress and qualification for the Final went out the window.

European KZ2 champion in 2009, Angelo Lombardo then had to pause his top level career for ten years. He had an interesting run during the heats despite a distant starting position, but could not join the 36 finalists.

Francesco Celenta was more successful in Adria than Wackersdorf. A regular top ten driver in both the Qualifying and the heats, he had everything in place in the Final to aim for a good result. Unfortunately, the melee in the early race saw him lose several places. With great determination he made an impressive 10-place recovery, an achievement on this circuit, and finished 7th with the fastest lap in the race just a few metres behind the future champion.

The competitiveness of Parolin Motorsport in the gearbox categories is confirmed race after race. It will be interesting to follow the performance of the Italian team at the world meeting in Kristianstad, Sweden, in early September.