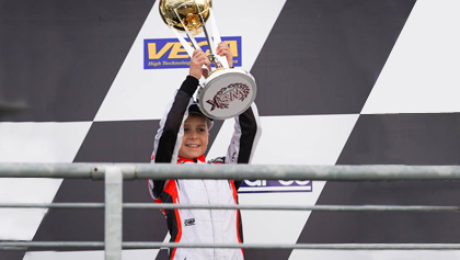 The WSK Final Cup, the last international event of the 2019 season, was marked by wet and cool weather on the Adria circuit, with a constantly slippery surface. The Parolin Racing Kart team were not lacking good performances with Rashid Al Dhaheri’s pole position in 60 Mini and Anatoly Khavalkin’s 2nd place, Tymoteusz Kucharczyk’s 3rd place in OK-Junior and Hugo Sasse’s excellent results in OK.

Still extremely well represented in the 60 Mini category, Parolin chassis made up nearly half of the Adria field in the youngest age groups, with a similar proportion in the top 10. The performances achieved in OK-Junior and OK also confirmed the value of Parolin in the other categories. Over the whole meeting, the official Parolin Racing Kart team took a pole position in Mini thanks to Al Dhaheri, as well as five wins in the heats and three wins in the Prefinals, in addition to the double podium for Khavalkin and Kucharczyk. An indisputable sign of its competitiveness at all levels and the quality of its Mini to OK programme, the Parolin team was the only one to record victories in all three categories.

“We can be proud of the whole season,” said Marco Parolin. “The enthusiasm for our chassis has been evident in every race, whatever the conditions. Whether in the full heat of summer or in the cool, rainy autumn, the Parolins have always enabled their drivers to highlight their talent. This was our initial goal and our success has exceeded our expectations. The other satisfying aspect comes directly from our Racing Team. We have the same philosophy as that which drives the production of our chassis. We support the careers of young drivers by participating in their training to the highest level. The rapid success of Anatoly Khavalkin in 60 Mini and the promising evolution of Tymoteusz Kucharczyk in OK-Junior are good examples of this, alongside the performances of experienced drivers such as James Wharton in Junior and Hugo Sasse in OK.“

Hugo Sasse has indeed achieved very good performances in the premier class. After setting his group’s 2nd fastest time, he was able to make up the delay after his retirement in a heat by winning his Prefinal with the fastest time. Despite a bad start in the Final on the still wet part of the track, Hugo was able to regain 12 places to finish 8th in the WSK Final Cup. Meanwhile, Tadas Bagdonavicius was plunged into the deep end of international competition in unfavourable conditions.

James Wharton, who set his group’s 3rd fastest time in OK-Junior, finished in an excellent 2nd place in his Prefinal. In difficulty at the start of the Final, he managed to come back from 13th to 7th place. Solid in adversity, Tymoteusz Kucharczyk regained 10 positions during the heats, confirmed in the Prefinal and climbed four more places in the Final to reach the 3rd step of the podium to conclude a promising season. Henri Saaskilahti made a good run to 26th place. Delayed by a retirement in a heat, Matheus Ferreira was close to the top 10 of his Prefinal before having to retire early in the Final. Giovanni Trentin narrowly missed his qualification for the Final, Mateo Rubio was struggling in the rain while Keanu Al Azhari made his OK-Junior debut.

Rashid Al Dhaheri started with pole position in 60 Mini and won two heats and his Prefinal with the fastest time. He was fighting in the top three of the Final before losing ground at the end of the race due to changing conditions. Starting with 13th in Qualifying, Anatoly Khavalkin climbed back up in the heats and won his Prefinal with the fastest lap before achieving a superb Final that ended on the 2nd step of the podium for the first time. Ranked 45th at the end of the heats, Shimo Zhang qualified by moving up nine places in his Prefinal before maintaining his place in the Final. Peter Bouzinelos had too many problems in the heats to reach the Final.

Parolin on the pace at Castelletto 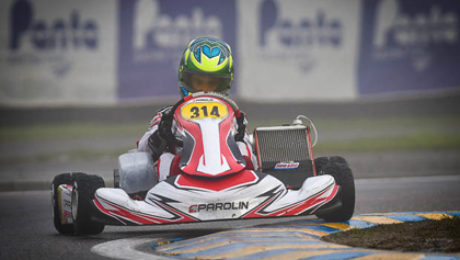 Organised on the 7 Laghi circuit of Castelletto, the second and last WSK Open Cup event was not spared by the weather. The cool weather was accompanied by many showers, although the Finals were held on a virtually dry track. Hugo Sasse in OK and James Wharton in OK-Junior confirmed Parolin’s excellent competitiveness while the successes multiplied in Mini in parallel with the revelation of two young talents in the Parolin Racing Kart team with the Russian Khavalkin and the Chinese Zhang.

The competition was complicated for everyone due to the weather. The Castelletto track experienced every condition, from flood to fog, with an infinite number of variations in grip.

“The Parolin chassis coped successfully the difficult weather at Castelletto,” said Marco Parolin. “In all categories, the performance was there, in the rain, in the dry and in all conditions in between. The races were not always favourable to the factory team, whose momentum was broken by several incidents. We did not obtain the results we could have reasonably expected, but we can be satisfied overall with the performance of our chassis and drivers during this autumn competition. I would like to congratulate in particular our two new drivers, Anatoly Khavalkin and Shimo Zhang, for their superb debuts with us, while Peter Bouzinelos convinced us with his great comeback. We are very sorry that Rashid Al Dhaheri’s troubles prevented him from participating in the fight at the front as he deserves.“

Hugo Sasse started well with the 2nd fastest time in his session in OK Qualifying, but lost ground due to a chain failure in the first heat. He came back from 13th place in the heats to 9th place overall and despite this misadventure was close to being in the top 10 of the WSK Open Cup.

The times of the official OK-Junior team drivers were not outstanding, but they mostly corrected the situation well afterwards. James Wharton climbed to 3rd place in his Prefinal after recovering more than 20 places in the heats. Matheus Ferreira finished 6th in his Prefinal ahead of Timoteusz Kucharczyk, who set the 2nd fastest lap in the race. The Final allowed him to improve further and finally reach 11th place. Wharton had to retire at the beginning of the race due to mechanical problems while he was in 2nd place. Ferreira did not finish the Final either.

The new Chinese rookie Shimo Zhang shone at the top of the second Qualifying session, ranking 2nd among the 66 drivers present. Anatoly Khavalkin moved up in the heats from 8th to 4th place, confirming his promise in the process. Rashid Al Dhaheri regained 10 places in the heats and represented the team’s best prospects in 6th place in his Prefinal after Khavalkin’s retirement. Al Dhaheri had to retire with fuel problems midway through the Final as he climbed back up before being penalised for his spoiler. The young Australian Peter Bouzinelos, 45th in Qualifying, made it to the Final. He climbed to 22nd (+12 places), but his dropped spoiler cost him six positions.

Parolin Racing Kart will be back on track next weekend at the WSK Final Cup in Adria with the ambition of achieving more convincing results that match their potential.