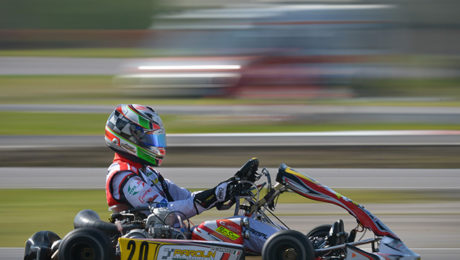 While the WSK Super Master Series began in the cold of Castelletto, the second round saw sun on the Circuito Internazionale Napoli. A new challenge awaited the Parolin team in KZ with Lorenzo Camplese the driver on the first fast track of the season. It is clear that the performance was again excellent, among the best specialists in the discipline. The race was unfortunately cut short for Camplese, who was a victim of a collision in the Prefinal.

Despite the development work being disrupted by free practice on a wet track, Lorenzo Camplese’s Parolin / TM was immediately on the pace during the official timed practice with the second best time in the KZ category 34 thousandths from pole position. The tone was set. Always among the top five in the field, the Parolin Racing Kart driver finished the qualifying heats in a good position, 4th, before tackling the final stages with strong ambitions.

He made a very good start in Prefinal A. As fast as he is determined, Camplese went on the attack without taking too many risks at the start. He had seized 3rd position on the second lap of the race when he was pushed and spun. He was able to restart, but had to retire shortly after.

“It is a great disappointment,” admitted Lorenzo Camplese. “This kind of incident should not happen at this level of competition. Until then, the meeting confirmed our competitiveness in conditions very different from those of the first races of the year, proving the quality of the Parolin chassis on any circuit. Although I completed just four laps in the Prefinal, I was able to set the second fastest time of the race. This means the potential was there! I am even more disappointed to have been forced to retire as it jeopardises our chances in the championship. I finished up in 11th place while I was aiming for the top five. That’s racing though and we’ll keep fighting to demonstrate the quality of Parolin Racing Kart product.”

Since the beginning of the season, Parolin has been battling at the front in KZ, the highest level of international competition, among the best in the discipline. The young Racing Team from the Italian brand has produced achievements in each of its races, highlighting the quality of the Venetian factory’s products in the most spectacular way against the most experienced teams. It is a great satisfaction for Parolin Racing Kart to defend its colours in this excellent way and to support its customers in their wise choice. The adventure is just beginning, the best is yet to come!

Parolin is in the KZ game in the turmoil of Castelletto 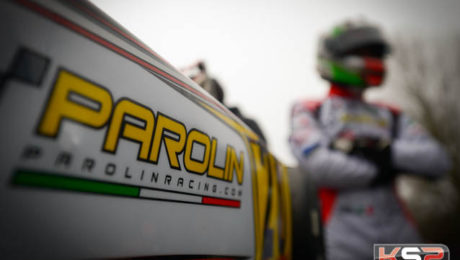 After successful debut at Adria during the WSK Champions Cup, the Parolin Racing Kart Team continued in international competition at the first round of the WSK Super Master Series. On this occasion Lorenzo Camplese made his debut in the KZ category, for the professionals of karting. Despite extreme conditions and a shortened programme, the factory Parolin Racing Kart driver achieved extraordinary well to fight in the top three at the start of the final.

The winter weather at Castelletto did not make the task easy for the Parolin Racing Kart Team in early March. Distanced during the first free practice session, Lorenzo Camplese was back on the pace from the second session. Qualifying didn’t provide complete satisfaction with a 13th place overall but the team worked hard to enable the driver to move up significantly in Prefinal A on Sunday morning. Camplese was very close to the best in pure performance and regained six places to finish in 3rd position in the wake and on the pace of the eventual winner.

The competitiveness of Parolin Racing Kart was displayed again in the Final and Camplese immediately found himself in the fight for the top three. He then lost ground because of the intensity of the battle, before resuming the ascendancy in the final laps and finished 7th in a lively race. Lorenzo is in 7th place in the provisional championship standings among a stellar roster of confirmed champions.

“The weekend of Castelletto wasn’t easy for anyone,” confided Albino Parolin. “We are not, however, unhappy with our performance. The team is very young and we are already comparable to the greatest specialists with long experience in KZ. We must not forget that this is currently the premier class where the professionals of world karting race.

We proved that our KZ chassis was at the peak of competition, ensuring that our racing product is the same our customer base is receiving, which is one of the main objectives for the company. We have planned our development programme with the goal of being at the top for the major CIK-FIA international events and will soon meet our opponents again for the second meeting of the WSK Master Series Super at the Sarno circuit.”