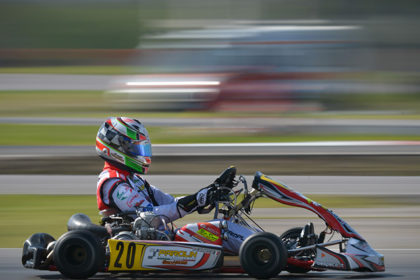 While the WSK Super Master Series began in the cold of Castelletto, the second round saw sun on the Circuito Internazionale Napoli. A new challenge awaited the Parolin team in KZ with Lorenzo Camplese the driver on the first fast track of the season. It is clear that the performance was again excellent, among the best specialists in the discipline. The race was unfortunately cut short for Camplese, who was a victim of a collision in the Prefinal.

Despite the development work being disrupted by free practice on a wet track, Lorenzo Camplese’s Parolin / TM was immediately on the pace during the official timed practice with the second best time in the KZ category 34 thousandths from pole position. The tone was set. Always among the top five in the field, the Parolin Racing Kart driver finished the qualifying heats in a good position, 4th, before tackling the final stages with strong ambitions.

He made a very good start in Prefinal A. As fast as he is determined, Camplese went on the attack without taking too many risks at the start. He had seized 3rd position on the second lap of the race when he was pushed and spun. He was able to restart, but had to retire shortly after.

“It is a great disappointment,” admitted Lorenzo Camplese. “This kind of incident should not happen at this level of competition. Until then, the meeting confirmed our competitiveness in conditions very different from those of the first races of the year, proving the quality of the Parolin chassis on any circuit. Although I completed just four laps in the Prefinal, I was able to set the second fastest time of the race. This means the potential was there! I am even more disappointed to have been forced to retire as it jeopardises our chances in the championship. I finished up in 11th place while I was aiming for the top five. That’s racing though and we’ll keep fighting to demonstrate the quality of Parolin Racing Kart product.”

Since the beginning of the season, Parolin has been battling at the front in KZ, the highest level of international competition, among the best in the discipline. The young Racing Team from the Italian brand has produced achievements in each of its races, highlighting the quality of the Venetian factory’s products in the most spectacular way against the most experienced teams. It is a great satisfaction for Parolin Racing Kart to defend its colours in this excellent way and to support its customers in their wise choice. The adventure is just beginning, the best is yet to come!