Mini on top of European Junior at PFI 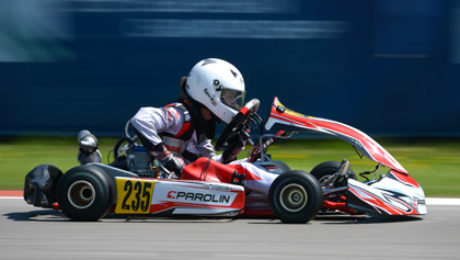 Parolin Racing Kart faced a particularly difficult challenge during the second round of the European Championship at the PF International circuit. In addition learning this unique British track, the young Italian team had to face the pack of formidable British drivers on their home ground. Gabriele Mini’ fulfilled his mission perfectly by getting on the third step of the podium which allowed him to take the lead in the provisional classification of the Championship, a good sign midway through the European season.

“The task was tough for our young drivers in facing a circuit like PFI with its many specificities,” said Marco Parolin. “Our team is also new to OK-Junior and we did not have many references on this track. We opted for a reasonable strategy based on our attributes and to progress throughout the competition. We had the pleasure of welcoming for the occasion two young Australian drivers, Christian Mansell and James Wharton. Gabriele Mini’ drove very well, although the races were not easy on this track. 2nd fastest in Qualifying, he set two fastest laps in the heats and finally managed to get into the top three of the Final, which put him at the top of the standings. We have demonstrated that our potential for our IAME powered Parolin chassis is real in all conditions. Alessandro Cenedese managed to qualify for the Final, while Wharton made some great runs.”

The balance between performance and consistency paid off for Gabriele Mini’. He first set the fastest time of his group in Qualifying Practice with a good margin over his opponents and was 2nd overall when the three groups were combined. The set-up of his machine was adapted after the first two heats and he was able to score two consecutive victories. Starting from 5th position in the Final, he was constantly fighting in the top five and managed to take 3rd position in the last metres of the race. This magnificent podium placed him at the front of the Championship with an interesting lead over his pursuers. Qualified once again among the 34 finalists, Alessandro Cenedese had to give up one lap from his goal while he was back in the top 20.

Parolin Racing Kart continues its first season in OK-Junior. After the title won in the WSK Super Master Series, the goal is now clear in the European Championship. The next meeting will take place in a few weeks in Germany at Ampfing before the much-anticipated conclusion in France at Essay.