First win for Deligny in Junior at Campillos 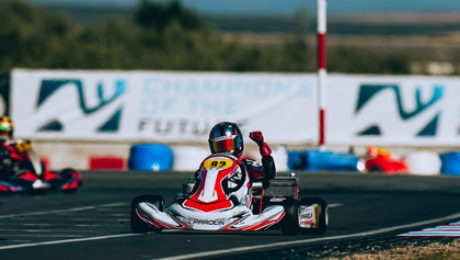 The Parolin Motorsport team has taken up residence in the south of Spain in preparation for the upcoming OK and Junior World Championship. The last meeting of the Champions of the Future by RGMMC series was a very important preparation event for the Italian team’s OK-Junior drivers. The performance of the Italian team was very noticeable, especially thanks to the victory for Enzo Deligny.

“It’s good for the mentality of the whole team to show such a high level of performance a week before a world event,” explained Marco Parolin. “Like all the teams, we have only recently encountered the Campillos circuit, but our preparation has proved to be effective. In a category with almost 100 participants, four of our OK-Junior drivers performed very encouragingly among the best. Enzo Deligny had been getting closer to victory for several races and I am delighted that he has done so in Spain. It is a very positive result for him and for the team. Maksim Orlov, Anatoly Khavalkin and Matias Orjuela were also very competitive and I hope that their performance will reflect on the whole team. We have some time to learn from this event, both for the equipment and the drivers, so that we can do even better at the World Championship.”

Enzo Deligny was immediately at ease on the Spanish circuit’s steep terrain and he drove a faultless race at the front. Very solid heats, in which he obtained two best laps, allowed him to return to the top five on Saturday evening. He confirmed this by finishing 2nd in the Prefinal before driving a superb Final. He started well and took the lead from lap 5 and then distanced his rivals to win with a 1.6” lead and another fastest lap.

Maksim Orlov was also in a position to get an excellent result. Twice winner in the heats, he was 2nd in this Qualifying phase. After a great fight in the Prefinal, he unfortunately had to retire immediately after the start of the Final. Matias Orjuela showed very convincing speed from his 7th position in Qualifying. Once in 2nd and twice in 3rd place, he finished 9th in the heats. An incident delayed him shortly before the end of the Prefinal, but he made up 10 places in the Final.

Anatoly Khavalkin had to deal with a distant 39th place during the heats. He still made up 12 places, but a retirement lost him all the benefit of his efforts in the Prefinal. Undiscouraged, he went back to work in the Final and reached a rewarding 12th place after a 23-position climb.

Guillaume Bouzar, René Lammers and Eric Gené encountered various setbacks along the way during the heats and could not make it to the Finals despite their potential.

In OK, Jesse Carrasquedo showed interesting competitiveness by regaining five places during the heats despite a retirement. The Final stages were more complicated for the Mexican. Arnur Shabdar was a little bit far back after Qualifying to be able to make it to the Final.

Podium and strong performance in WSK Open Cup at Adria 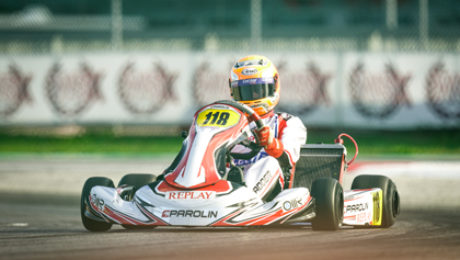 With a similar line-up to that of Lonato, Parolin Motorsport recorded better results at the conclusion of the WSK Open Cup at Adria Karting Raceway from October 1st to 3rd. The meeting started with pole position for Brando Badoer in KZ2 and continued with top threes for Dries Van Langendonck and Christian Costoya in the Mini heats. Anatoly Khavalkin was on the podium in the OKJ Final, while Enzo Deligny finished the Championship in 5th place.

“Without any particular stakes, this kind of competition allows the team to work for the future,” declared Marco Parolin. “We are always looking to improve the equipment, but the human side is not forgotten, as young drivers need to be guided throughout their learning process. Our level of performance was very convincing, even if it was less visible in OK. The balance of the event is positive with encouraging results from several of our Junior and Mini drivers. Parolin Racing Kart once again presented itself as a major player in Mini competition with a strong representation of more than 30% of the field and a continuous presence at the top of the rankings.”

Very fast against the clock with pole position, Brando Badoer still needs to enrich his experience in KZ2 races which is what he did in Adria by finishing 12th. For his first competition with Parolin Motorsport, Greek driver Fotios Sotiropolous was 16th. Jesse Carrasquedo moved up 18 places in OK to 13th position in the Final while Arnur Shabdar moved up to 16th.

Enzo Deligny put in a good performance as usual in the Junior class, finishing 5th in the heats and 2nd in his Prefinal. Unfortunately he lost 15 places at the start of the Final and could not climb any higher than 9th. Enzo nevertheless finished in the top five of the Championship. Anatoly Khavalkin fulfilled his mission by reaching the podium. After four good heats out of five, he regained three places in the Final and finished in the top three of the race and in 6th position in the overall ranking. Maksim Orlov had to retire on Friday afternoon and qualified 10th in his Prefinal, but he had to retire before the start of the Final. René Lammers was consistent in his heats and was able to make up more than 20 places, which allowed him to compete in the Prefinal and the Final without worries.

Amongst the 102 Mini drivers in Adria, Christian Costoya was in 2nd place Qualifying. He stayed in the leading group with a good consistency, finishing 6th in the Final and took 4th place in the Championship. Dries Van Langendonck confirmed his good pace during a very convincing event and he finished in the top five in the Final. Oliver Kinmark started from 26th position in the Qualifying Heats, but he made his way up the heats with a top four and a fastest lap, finally taking 14th place. Jack Illife scored two top threes in the heats plus a 5th place with the fastest time, while William Calleja was the fifth team driver to qualify for the Final.