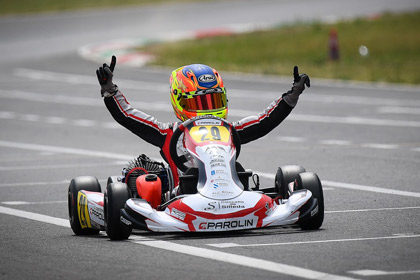 Parolin Motorsport is proud to announce that factory team’s young driver Christian Costoya is joining All Road Management, while continuing his 2022 karting programme with the Italian squad.

Guided by founder Nicolas Todt, All Road Management scouts and develops talents since 2003 with the ultimate goal of reaching the pinnacle of motorsports. Parolin Motorsport’s 11-year-old factory driver Christian Costoya has been selected by Todt’s group and will now be supported by the French manager’s extremely professional team. After having displayed his stunning skills last year, being crowned WSK Euro Series champion and Italian vice-champion, Christian has started the 2022 season on the right foot by winning the WSK Champions Cup and clinching silver medal at the WSK Super Master Series as well as at the Andrea Margutti Trophy. Furthermore, Costoya has claimed victory in Race 2 at the first round of the Italian ACI Karting Championship. As he begins a promising new adventure with All Road Management, the Spanish driver will keep competing with his Parolin MINI chassis at national and international level.

Parolin Motorsport is delighted to have contributed to such an important step in Christian’s career. Born in 2010, the young talent is the third Parolin driver who joins All Road Management, following in the footsteps of Gabriele Mini and James Wharton.