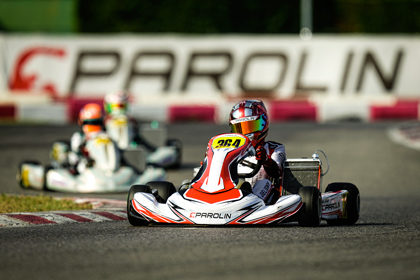 The last part of the season opened on September 17th-19th at the Lonato circuit with the first of the two WSK Open Cup events. The official Parolin Motorsport team had changed its look for the occasion and adjusted to accommodate the arrival of young drivers. While Brando Badoer made his debut in KZ2, Enzo Deligny finished in the OK-Junior top five just ahead of Maksim Orlov, Christian Costoya shone in the Mini top five while newcomer Dries Van Langendonck showed great potential.

“Lonato was a satisfying event in terms of performance”, said Marco Parolin. “We showed great competitiveness in Mini and Junior, as well as in KZ2 where our rookie showed very good speed. I am happy to see our customer teams competitive in Mini and an increasing number of drivers trusting the Parolin chassis. In OK-Junior the Final result was impacted by the rain in the Prefinals, where we suffered and lost some positions. But the potential was there with a podium within reach, considering the speed shown in the heats and the Final. To have placed three drivers in the top eight in such a difficult category is a source of pride and a sign of consistency of performance.”

Brando Badoer was making his debut in KZ2 racing. Noticed for his 3rd fastest time in Qualifying, he encountered some understandable difficulties in the racing, but finished nevertheless with a very honourable 18th position in the Final.

Back in competition after a summer break, Enzo Deligny showed excellent competitiveness to reach 2nd in the OK-Junior heats thanks to four wins and a fastest lap in the race. Winner of his Prefinal, he fought hard in the top five of the Final and finished 4th in the Championship. After his 41st time, Maksim Orlov was delayed by two retirements in the heats. During his Prefinal on a wet track he came back to the front, his 16-place improvement taking him to 4th place. He improved again on the dry track in the Final to reach 6th position. Anatoly Khavalkin made up 11 places during the Qualifying Heats thanks to three top three finishes and two fastest laps. He started well in the rain in the Prefinal, but lost ground afterwards. Thanks to his speed in the Final, Anatoly regained 21 places in 17 laps and finished in 8th position.

Guillaume Bouzar qualified thanks to a 15-place gain in the Prefinal, but did not reach the finish of the Final. René Lammers was fast in a category where he still lacks experience and started with a top 10 in Qualifying before obtaining a 2nd place and two top sixes with a fastest lap in the heats. However, several incidents slowed down his race and he had to retire in the Prefinal. For his debut in OK-Junior, Matias Orjuela narrowly missed out on qualification among the 36 finalists.

Christian Costoya was once again one of the contenders in Mini, with 101 participants in Lonato. After 3rd in Qualifying, 2nd in the heats, he won his Prefinal. He took part in the fight for the Final victory and finished 5th to score 4th in the Championship. Dries Van Langendonck soon found his feet with Parolin Motorsport. Twice winner, twice 3rd and with a fastest lap in the heats, he encountered problems at the start of his Prefinal and qualified with a loose spoiler. Very determined, he drove an impressive Final and finished 8th with the fastest time and 18 places gained. Oliver Kinmark lost time in the heats before coming back into the game in the Prefinal, then finishing 17th in the Final. Simas Baciuska qualified for the Final thanks to a good effort in the wet Prefinal and finished in 29th position. Jack Illife showed a clear improvement during the timed sessions and then in two of his heats where he reached the top three and set a fastest lap. The new recruits to the team added to their international experience with more or less success. Among them, Alessandro Truchot made the strongest progress.