Parolin back to winning ways in Lonato 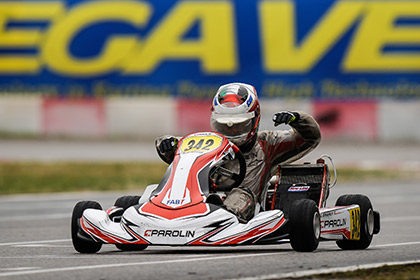 For the launch of the WSK Euro Series at Lonato, the tough competition, especially in the rainy Final stages, made the meeting particularly challenging for the drivers. The return of Al Dhaheri meant victory in OK-Junior for Parolin Motorsport, while the performances of Celenta in KZ2, Rinicella in OK and Costoya in Mini showed the competitiveness of the team in all categories. Parolin Racing Kart was the most represented chassis brand in Mini and ranked second in all categories, while it was the only one to win in two different categories in Lonato with Parolin Motorsport in Junior and Baby Race Driver Academy in Mini.

“Rashid Al Dhaheri, who was absent from the WSK Super Master event in Sarno, was very motivated for his return to the track in Lonato,” analysed Marco Parolin. “Impressive in the rain, he was simply unbeatable. We are very happy with his victory. This should not make us forget the superb start of Guillaume Bouzar, nor the confirmation of Enzo Deligny in the heats. Kai Sorensen came back in great shape and Anatoly Khavalkin proved to be excellent for his comeback in our colours. We have a very promising line-up in OK-Junior this year. Francesco Celenta was again very competitive in KZ2 as the undisputed leader on Saturday. James Wharton continued to grow in strength, even in the rain, while Slavik Putiatin progressed to the Final. Valerio Rinicella showed our speed in OK with his top five finish in the heats, while Jesse Alejandro Carrasquedo Parada and Arnur Shabdar continued to improve throughout the event. Our competitiveness in Mini was confirmed in all conditions with Christian Costoya and Matias Orjuela. The current level of performance of our equipment and our team is very interesting in all categories and we are looking forward to the coming races.”

The WSK Euro Series in Lonato started well with Guillaume Bouzar setting the 2nd fastest time in Qualifying and then followed it up with three good heats. Enzo Deligny was always in the top three and won two heats to top the standings on Saturday evening. Rashid Al Dhaheri, who was 13th, was unstoppable in the Final stages in the rain. He took seven places to win the Prefinal and won the Final after setting the fastest lap in each race. He therefore took the lead of the Championship. Back with Parolin Motorsport, Anatoly Khavalkin had already regained 20 places in the heats and continued to climb to 16th in the Final despite a spoiler penalty. Kai Sorensen had regained his fitness in Qualifying and went on to complete three good heats, but was held up by a penalty.

Celenta at the top in KZ2

Francesco Celenta started in 2nd position in Timed Qualifying and took the lead in the heats with two wins and a fastest lap in the race. He kept the pace in the rain in the Prefinal before an incident relegated him to the back of the grid on the first lap of the Final, preventing him from defending his real chances of a good result. James Wharton moved up in the heats and confirmed his progress with a fastest time. Unfortunately, after a good start in the Prefinal, a penalty denied him access to the Final. Slavik Putiatin was already making up ground during the heats before regaining another six places in 26th place in the Final.

Rinicella back in the top five in OK

Valerio Rinicella, who was not able to race in Sarno, made a great start in Lonato. After his 10th position in Qualifying, he climbed back to 5th place in the heats by setting the fastest lap in the race. Unfortunately, he had a problem and could not start his Prefinal. Jesse Alejandro Carrasquedo Parada and Arnur Shabdar continued to improve and reached the Final, finishing 22nd and 24th respectively.

Christian Costoya climbed 19 places to 3rd in the heats with a win and a fastest lap to his credit. He was delayed in the Prefinal but made up another 20 places in the Final to reach 8th place. Matias Orjuela was not to be outdone, also securing a win and a fastest lap in the heats. He was less comfortable in the Final stages, but came back in 18th place in the Final. Oliver Kinmark took a good 4th place in a heat and qualified for the Final despite the tricky track, while Simas Baciuska was unable to make up for the handicap of his distant position in Qualifying.