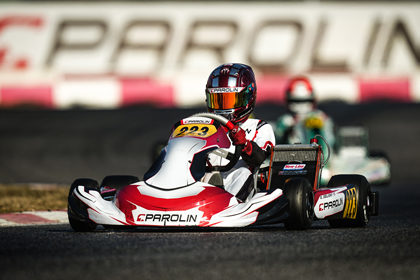 In a very tough WSK Super Master Series Round 2, Parolin Motorsport showed a remarkable level of competitiveness in all categories. Of course, results were more difficult to achieve with a record field of over 350 participants. Despite several setbacks, Parolin Motorsport reached 6th place in OK with rookie Enzo Deligny, René Lammers held on to 3rd place in the Junior ranking while Anatoly Khavalkin finished 6th in the Final. Dries van Langendonck was on the Mini podium followed by Christian Costoya, both in the top three of the Super Master Series.

“WSK Promotion can be proud to have broken its absolute participation record this weekend“, said Marco Parolin. “This is a well-deserved reward for the quality of the organisation and a very positive indication for high-level karting. The competition was more demanding due to the high number of competitors competing simultaneously on the track, especially during the 46 Qualifying Heats and the eight Prefinals. Fortunately, our Parolin/TM Racing equipment performed very well throughout the meeting.

Despite their best efforts, our drivers were not always able to avoid incidents and penalties. It was a difficult exercise and we had to be very successful in order to reach the top positions. I am universally satisfied with the progress of our drivers. We can already see some young talents blossoming and the rest of the season will bring us some pleasant surprises. With 48 Parolin chassis in the starting line-up, our brand is in an enviable position at this level with a third of the field and four Parolin karts in the Final top five.“

In terms of results, the KZ2 results did not match the true performance level of Parolin Motorsport. Lorenzo Travisanutto was very fast and set three best laps in the race after his superb 3rd place out of 93 participants. This was not enough to allow him to shine in the Final because of a retirement and four penalties.

In OK, the two rookies did a good job. Enzo Deligny was 6th and Maksim Orlov 11th out of 60, both had solid heats before following each other to 3rd and 4th in the Prefinal. Enzo continued his progress in the Final by finishing 6th while Maksim had to retire while making progress towards the top 10.

Anatoly Khavalkin managed to regain 16 places during the OK-Junior Qualifying Heats to climb to 2nd place out of 90 participants. He finished the Final in 6th position, which moved him up six places in the provisional series ranking. René Lammers had regained 24 positions in the heats by finishing 4th, but the Final stages were not favourable to him and he ended with a retirement. He remains in the top three of the ranking. Zac Drummond had a very solid run from his distant 61st time. After avoiding all the pitfalls in the heats, he moved up 38 places and continued his climb by moving up another 12 positions to 13th in the Final.

The Mini category had 108 participants, a record. Christian Costoya and Dries van Langendonck confirmed their talents in the face of strong opposition. With a total of six heat wins between them, they achieved their objectives. Christian won his Prefinal before taking a rewarding 4th Final position after an intense battle. Dries played a great card in a hectic last lap to reach the third step of the podium. They follow each other in 2nd and 3rd place in the series standings at the halfway point.

Jack Illife stepped up his game in a consistent performance that took him to 7th place in the Final. William Calleja posted three fastest laps in the heats, but dropped out in his Prefinal. A fine 10-place recovery allowed him to reach 13th position in the Final. Bruno Gryc developed positively during the entire event to finish 20th, despite a penalty for a badly fixed front fairing, having set the fastest lap of the Final. 65th in Qualifying, Angelo Bruno Blanco managed to qualify for the Final, but had to retire after a few laps.