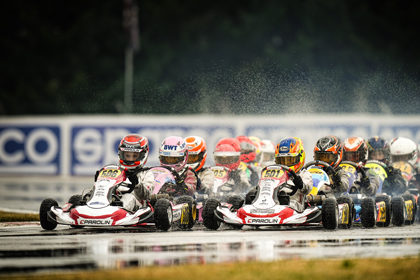 Parolin Motorsport travelled to southern Italy to participate in the penultimate round of the WSK Super Masters Series at La Conca with 13 young drivers. The wet conditions in the Qualifying Heats and the lack of grip in the Finals made for some very special racing on a track that is usually known for its strong grip. The Parolin chassis proved to be competitive in these unusual conditions. Anatoly Khavalkin came close to the top five in OK-Junior, while Christian Costoya finished on the Mini podium just ahead of Qualifying poleman Dries van Langendonck, both of whom impressed the meeting with their speed.

“The weekend in La Conca started well, both in Mini and Junior“, said Marco Parolin. “In both categories we had good results in the dry on Friday, when the track was grippy and fast, and in the wet on Saturday, when we won the heats with four different drivers in both categories. Unfortunately the conditions on Sunday made it more difficult than expected. Compared to the previous dry conditions, the track was about four seconds slower in Mini and seven seconds slower in OKJ. Our drivers tried to maximise their results despite the difficult situation. We didn’t get the results we expected at the beginning of the weekend, but it was certainly an important learning experience for the whole team.

Dries van Langendonck and Christian Costoya performed very well in the rain with eight heat wins in total, including five fastest times. Costoya made a great comeback in the Final to finish 3rd ahead of van Langendonck and both confirmed their presence in the top three of the Super Master Series. Bruno Gryc continued to make progress with a top three in a heat and a 16th place in the Final, while Jack Illife came close to the top 10 in the heats.

Parolin chassis were once again well represented with almost 40% of the Mini field, pole position and half of the top 10 in Qualifying and the top four places in the Final with eight Parolin karts in the top 13. Parolin was the leader in terms of number of chassis in all categories and also achieved good results in OK-Junior. René Lammers was very convincing in the heats and was in the top three at the beginning of the race, but he gradually lost places. Anatoly Khavalkin had solid heats despite a retirement and continued his effort with success by reaching 6th position in the Final. Zac Drummond confirmed his potential with a win and a 2nd place in a heat. We will now head to the Naples region for the final round of the WSK Super Master Series next weekend in Sarno.“

The detailed performances of the Parolin Motorsport drivers at La Conca allow a better appreciation of the competitiveness of the team.

OK-Junior
René Lammers remained well placed in the provisional Super Master standings with his 4th position. He had moved up 10 places during the heats with a win and a 2nd position with two fastest laps in the race. 2nd on the starting grid of the Final, he lost a few places as the laps went by. Anatoly Khavalkin, who had been in the top four until then, was delayed by a retirement in the last heat. He drove a good Final where a gain of three places brought him to the 6th position. Zac Drummond’s great comeback after the heats was affected by a retirement and a penalty, but he still secured 16th place in the Final.

Mini
Dries van Langendonck had dominated the Mini category from Qualifying to the heats, making a faultless run in the lead and setting three fastest times. The start of the Final did not go in his favour, but he attacked relentlessly to come back to 4th place. Christian Costoya started at the same pace. A problem in his third heat thwarted his progress. 9th on the starting grid of the Final, he drove a very good race to take 3rd position on the podium. Bruno Gryc performed well and climbed 21 places to 16th in the Final, as did Jack Illife in 17th place after a difficult Final.