Double victory in OK and OK-Junior on the Neapolitan circuit 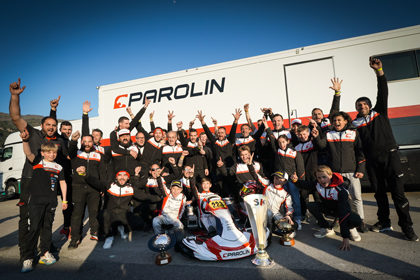 The WSK Super Masters Series has just finished at the Circuito Internazionale Napoli with an intense fourth round with a large number of participants. The Parolin Racing Kart chassis put in top performances in all four categories and Parolin Motorsport recorded several outstanding successes at the end of the series. Enzo Deligny achieved a fantastic victory in OK, while Anatoly Khavalkin won in OK-Junior. Christian Costoya finished 4th in a Mini Final that went down to the wire. For his return to competition, Francesco Celenta was extremely fast in KZ2.

“We have many reasons to be happy after the competition in Sarno,” declared Marco Parolin. “Christian Costoya and Dries van Langendonck finished on the championship podium in Mini and we placed three drivers in the top 10 of the Final while the performance level of the whole team improved again. Anatoly Khavalkin managed to win in OK-Junior after a long battle and Enzo Deligny was able to get his first victory in OK with a high performance kart. Finally, Francesco Celenta’s three fastest laps in KZ2 are indicative of our competitiveness in KZ2. The team’s work has definitely paid off in terms of performance and our successes are very positive indicators less than a month before the start of the FIA Karting European Championships.”

The weather was sunny throughout the Sarno meeting, but temperatures remained cool for the region. A large field of 271 drivers entered this final round of the WSK Super Master Series. As always on the Neapolitan track, the races were exciting and hectic. Parolin was well established in the leading group in 3rd place among chassis manufacturers with strong numerical domination in the Mini class where four Parolins finished in the Final top five. The OK and OK-Junior victories were a reminder of the competitiveness of the Bassano del Grappa-based brand in the other categories.

The increase of the general standard of the Parolin Motorsport Mini drivers was particularly visible in Sarno. Jack Illife set the 3rd fastest time in the Qualifying session and the very young Alessandro Truchot was 6th among the 79 best specialists of the category. Bruno Gryc set two fastest laps in the heats and in the Final he gained 10 more places to 16th place. Dries Langendonck was regularly in the top two of the heats until a retirement delayed him. He still managed to finish 9th in the Final and was able to take 3rd place in the championship. William Calleja was 19th in the Qualifying Heats, but he continued to improve and reached 7th place at the end of the Final. Finally, Christian Costoya shone in the heats and fought for the Final victory. He was the leader for a long time, but then secured 4th place to finish 2nd in the championship.

Anatoly Khavalkin had a superb meeting, regularly in the top five since Qualifying. But it was during the Final that he gave his best. After a waiting race in 2nd position, he went on the attack with three laps to go to finally take his first success of the year. He secured 4th place in the championship. Zac Drummond confirmed his very positive progress by making a superb Final climb of 11 places to finish in the top 10. It was a difficult weekend for René Lammers after qualification in 28th position as he had to retire in the Final.

OK: Deligny at the top

We hadn’t seen Enzo Deligny on track since his 6th place in Lonato in February. Very solid in Qualifying and in the Sarno heats, he was imperial in the Final. He started 9th, climbed relentlessly and took the lead after seven laps and increased his lead to celebrate his first victory at this level. On the podium, he praised the work of the team who had provided him with a perfect machine to win.

KZ2: Celenta comes back in force

Away from the circuits since his injury in Lonato at the end of January, Francesco Celenta was fast and consistent in his comeback from 29th place in Qualifying. With a total gain of 22 places, he finished 7th in the Final (+6 places) with a new fastest lap in the race.