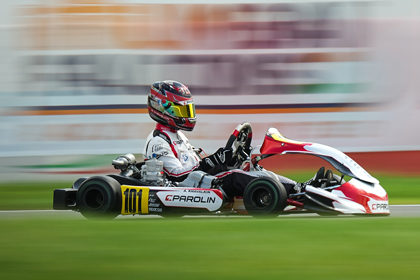 The FIA Karting World Championship – OK and OK-Junior took place this year in Italy, at the Circuito Internazionale Napoli in Sarno. The weather conditions alternated between a dry and wet track at the beginning of the meeting before concluding in sunny conditions. The competition proved to be very demanding for the machines and for the drivers, especially with regard to the new track surface.

Maksim Orlov was the author of a very solid run at the front of the OK category. He finally climbed to 4th place after a ten-place improvement. Enzo Deligny made up 11 positions by crossing the line in 7th, but was placed 17th because of his badly positioned front fairing. Rashid Al Dhaheri had qualified 11th for the Final, but was one of five drivers who could not complete the first lap.

Anatoly Khavalkin was 3rd with two laps to go in the OK-Junior feature and had a difficult finish before crossing the line in 6th place. Unfortunately, a penalty for an incorrectly positioned front fairing sent him back to 11th place. Meanwhile, Rene Lammers made a historic 25-place climb to 5th in the world rankings.

“What a weekend it was for us in Sarno”, said Marco Parolin. “The Parolin Motorsport team worked very hard to achieve the best possible performance in all conditions of the World Championship. This was probably the busiest meeting of the year. We have had our ups and downs, but we can be proud of what we have achieved. Many of our drivers were able to excel thanks to the constant motivation of everyone. To finish at the foot of the podium in OK is a very good performance for Maksim Orlov. In OK-Junior, all our drivers qualified for the Final. Rene Lammers achieved a great feat by reaching the top five from his 58th place in Qualifying. His Final was remarkable. Anatoly Khavalkin was excellent, securing the top three throughout the event. Leader at the end of the Super Heats, the Final battle did not go in his favour and he finished 6th on the line before being penalised. We’ll take a short break before coming back on track very soon!”

Maksim Orlov
5th in Qualifying, 16th after the heats, 14th after the Super Heats, 4th in the Final with an improvement of 10 places.

Enzo Deligny
31st in Qualifying, 21st in the heats, 18th after the Super Heats, 7th (+11 places) at the finish of the Final, ranked 17th because of a spoiler that fell off in the battle.

Rashid Al Dhaheri
8th in Qualifying, 13th in the heats, 11th after the Super Heats, retired on the first lap of the Final (collision).

Anatoly Khavalkin
3rd in Qualifying, 2nd in the heats with three victories, winner of his Super Heat, 6th in the Final, ranked 11th because of a dropped spoiler like 14 other drivers.

Iwo Beszterda
27th in Qualifying, 12th in the heats (+15 places), 12th after the Super Heats, 17th in the Final, ranked 20th because of a dropped spoiler.