Costoya on the second step of the podium at Adria 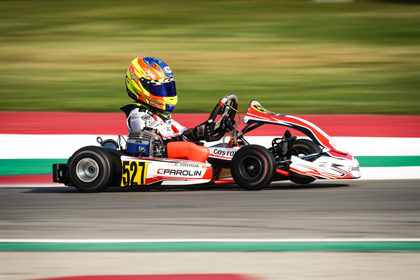 The arrival of warm summer weather coincided with a number of new and rewarding performances for the Parolin Motorsport team at Adria Karting Raceway. The second round of the WSK Euro Series, which took place from 10th to 13th June 2021, saw Christian Costoya shine at the top of the Mini class, while Francesco Celenta showed his competitiveness in KZ2 at the circuit which will host the final round of the European Championship in August.

“Francesco Celenta had the potential to fight for the KZ2 victory”, analysed Marco Parolin. “He was delayed in his last heat, but he was able to regain a lot of places in the Final stages and was close to the top five, while Lorenzo Travisanutto made an interesting debut in this category. I am confident ahead of the European Championship next week. It was a tough battle for our drivers in OK and OK-Junior. I am sorry that Alfio Spina could not take part in the OK Final, while James Wharton came back to the top 10. Rashid Al Dhaheri had put in a good performance in the heats and in his OK-Junior Prefinal. Enzo Deligny and Anatoly Khavalkin were both in the top 10. René Lammers’ first race in the Junior category showed good potential. Finally, Christian Costoya and Matias Orjuela were very fast in Mini. Christian finished 2nd, 8 hundredths behind the winner, Matias climbed up to 7th position after dropping out of a heat and Oliver Kinmark completed his best performance of the year. Our newcomers did not disappoint. In the Mini class, the Parolin chassis continued to prove their worth. They represented more than 30% of the field, dominating the top four in Timed Qualifying and the top five in heats. Five Parolin chassis finished in the top eight in the Final.”

WSK Euro Series in Mini is back on track for Parolin

The Parolin Motorsport team set five fastest race laps, including the Final fastest lap, in the Mini class with three different drivers. Christian Costoya won two heats and his Prefinal before taking the 2nd position in the Final, 8 hundredths behind the winner. He is now in 3rd place in the Championship. Matias Orjuela made up 10 places in the Final stages to finish 7th. Oliver Kinmark climbed 12 places to 3rd in the heats and Oscar Iliffe climbed to 23rd in the Final in his first Mini competition in Europe.

Al Dhaheri in 3rd place in the Junior ranking

The weekend was not easy for Rashid Al Dhaheri. He regained 17 positions during the heats after a distant 46th position in Qualifying and made up another seven places in his Prefinal. Unfortunately, a collision prevented him from completing the first lap of the Final. Enzo Deligny started well in 4th position in the Timed Qualifying, and completed three heats in the top five, one of which he won. However, a retirement in the battle and a penalty pushed him back to 19th place. The Frenchman nevertheless climbed back up to 8th in the Final. Anatoly Khavalkin moved up 22 places during the heats, despite a retirement, thanks to three magnificent top 3s and two fastest laps in the race. He finished 9th in the Final and confirmed his development within the team. For his first race in OK-Junior after a great run in Mini, René Lammers was very competitive in his first three heats. Two successive retirements did not allow him to reach the Final, but his potential is already promising.

Despite a retirement in the third heat, Alfio Spina was 12th in the Prefinal with strong ambitions for the Final, but he had to retire after a mistake on the formation lap. James Wharton finished 12th while Arnur Shabdar recovered 8 places to 17th in the Final.

Celenta confirms his potential in KZ2

Lorenzo Travisanutto gradually got to grips with his new class and finished 22nd in the Final before being penalised for a loose spoiler. Slavik Putiatin put in a solid performance to finish 19th in the Final.