Costoya crowned championship in the WSK Euro Series at Sarno 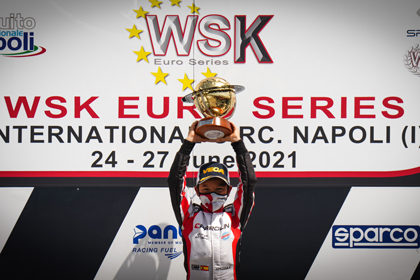 One week after Alfio Spina’s Italian Championship in the OK class, another Parolin Motorsport driver was successful on the Sarno circuit. The young Spaniard Christian Costoya triumphed in the 2021 WSK Euro Series in the Mini class. The competition was not easy for any of the team members, but Rashid Al Dhaheri managed to finish in the top five of the OK-Junior Championship.

“We can be proud of Costoya’s success in the Mini class,” said Marco Parolin. “This is a very important category for Parolin Racing Kart where the competition between the teams is very high. The WSK Euro Series represents the highest level for the growing number of young drivers. Our chassis was again used by more than 30% of the field in Sarno, half of the top 10 in the heats and four of them were in the top six in the Final. It is very satisfying to have won the title with Costoya, who was 2nd in the Final, while Orjuela finished 4th. Al Dhaheri made an incredible comeback in Junior to finish 5th in the Championship and Alfio Spina did well in OK.”

The team had already familiarised itself with the new Sarno track, but with temperatures often exceeding 30°, the intensity of the races caused numerous incidents. The first difficulty to overcome was the management of Qualifying Practice, where it is increasingly difficult to bring out the potential of the equipment and the drivers.

Christian Costoya started by returning to the front of the heats after his 13th Qualifying time and lining up a series of five victories, including one with the fastest time, all without making the slightest mistake. He managed the Final stages intelligently with a view to the Championship. Without taking any unnecessary risks, he secured 2nd place in the Final race on the winner’s wheeltracks. Christian reached his goal with a lead of more than 30 points, an exceptional performance when one remembers that the first WSK Euro Series event did not go well in Lonato.

Colombian Matias Orjuela also put in a convincing performance and finished 9th in the Championship. He was in the top three in four of his heats, and in 4th place of the Final he gained four positions with the fastest lap. The Swedish driver Oliver Kinmark started well in the top 10 of Qualifying and the heats, but two incidents in the Prefinal made him lose ground. He made up six positions in the Final to come 17th. The American Jack Illife showed himself to be more and more competitive with a good progression in the Prefinal which allowed him to finish 14th in the Final. His brother Oscar went from 40th in the heats to 27th in the Final. Lithuanian Simas Baciuska followed a similar pattern to reach 26th place. The third American in the team, Alessandro Truchot, showed a good attitude for his first European competition at this level.

The weekend did not go as planned for Rashid Al Dhaheri. Ranked 72nd in Qualifying, he gave everything to move up 42 places (a record!) at the end of the heats. He continued his incredible comeback to 12th position in the Final and saved the top five of the Championship. Anatoly Khavalkin had made an excellent start to the meeting by rising to 6th place in the heats, but had to retire shortly after the start of the Final. Enzo Deligny also made a good start and finished 7th in his Prefinal before being pushed in the Final.

In OK, Alfio Spina made a convincing performance by climbing back to 8th position in the Qualifying Heats and finished 12th in the Final. Mexican driver Jesse Alejandro Carrasquedo Parada showed great determination in the Final stages and finished the meeting in 26th place after moving up five places.