World podium for Parolin with Khavalkin 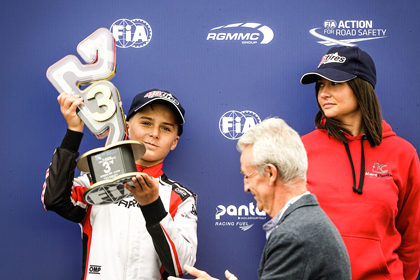 One week after Enzo Deligny’s victory in the Junior class, Anatoly Khavalkin reached 3rd place in the Junior World Championship on the same circuit of Campillos. Parolin Motorsport confirmed its excellent competitiveness at the highest level in a variety of conditions by qualifying four drivers for the Final in the 101-strong OK-Junior class and being the only team to finish on the podium in both races at Campillos.

“Although we prepared for it, the weekend was not easy”, said Marco Parolin. “It is obvious that the World Championship brings together the best drivers and that the motivation is stronger than for any other race. The weather added a layer of difficulty with intermittent light rain on Saturday morning and throughout Sunday. The work of the teams was crucial. I think our performance did not go unnoticed. Our Juniors were not very experienced: they were either racing their first full season in OK-Junior or had moved up from Mini to Junior within the year. Already in Qualifying we had three very fast drivers around the top 10. The heats were difficult to manage, René Lammers being the best placed at this stage. Anatoly Khavalkin was brilliant throughout the meeting. He didn’t make any mistakes and his last effort to regain another nine places in the Final earned him a place in the world top three. It’s fantastic for us to achieve such a result. Not only is our equipment very good, but we have also shown our ability to train young drivers. Our bet on the future is very satisfying!”“

The races were exciting to experience on the Campillos circuit, which offers many opportunities for overtaking. The precarious grip at many points added even more selectivity to the event. The big favourites of the season sometimes found themselves in trouble. In the Qualifying Heats René Lammers was already 8th, Matias Orjuela 10th and Enzo Deligny 11th. Consistently in the top five of the heats, Lammers ensured a great 7th position for the start of the Final. Orjuela had lost too much ground to qualify for the 36 finalists. Eric Géné showed an increased level of performance since the Champions of the Future event, but it wasn’t enough, while Guillaume Bouzar probably lacked recent driving to make the most of his abilities.

Anatoly Khavalkin managed to improve 27 places during the heats and never fell back. 39th in Qualifying, he started from 12th in the Final. Fully confident in his equipment and his abilities, he immediately went into attack mode and was in the top five after only six laps. He then closed the gap to the top three and moved into the top three with four laps to go, passing the poleman without hesitation. He still had time to secure the podium by distancing his opponents before the finish.

The young René Lammers showed himself to be a brilliant driver by finishing 7th in the heats. However, he was attacked from all sides in the Final battle on rain tyres. He nevertheless managed to finish his first World Championships in 20th position, despite a broken spoiler. Maksim Orlov put in his best performance of the weekend, making up 12 places in the Final to finish 23rd. Despite an encouraging Qualifying, Enzo Deligny did not find the ease he had shown the week before. After two good heats in 5th and 3rd positions, he crashed in the last. He was pushed back to the bottom of the ranking at the start of the Final, but he made his comeback to 25th position with consistency.

For his first season in OK, Jesse Carrasquedo showed an interesting competitiveness by regaining four places during the heats, which allowed him to reach his objective of qualifying among the 36 finalists. Less comfortable in the Final on a track with little grip, he finished the first lap in second-last position, but then climbed back up to 26th place. Arnur Shabdar was slightly far behind after the timed laps and two retirements in the heats did not allow him to qualify.