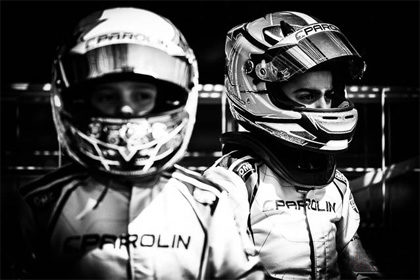 Despite all their talent and constantly competitive equipment, the Parolin Racing team drivers have not been able to achieve results that matched up to their expectations during the first event of the WSK Euro Series at Sarno. The intensity of the races that took place at the foot of Vesuvius this weekend was accompanied by various setbacks that sometimes weighed heavily in the results. However, there were good performances to the credit of the Parolin drivers.

Constant presence at the front in 60 Mini
Always very well represented among the youngest drivers, the Parolin chassis chosen by many teams once again showed extremely convincing results. Five of them were in the top 10 in the Qualifying sessions before winning five victories with eight fastest laps in the Qualifying Heats. In the Prefinals as well as in the Final, the win and the fastest lap were achieved at the wheel of a Parolin chassis. The Italian brand ultimately placed six drivers in the top 10 of the provisional ranking of the WSK Euro Series, including the leader.

Return to the top five for Al Dhaheri
Keanu Al Azhari was the only official Parolin driver to score well in Qualifying, as he was 2nd by 5 thousandths from pole position. He continued with very good runs in the top three with two wins and took control on Saturday night. It became more complicated for Keanu in the final stages and he had to settle for 14th place, but still took 7th place in the overall standings. Rashid Al Dhaheri did not achieve the expected performance in Qualifying. From 21st, he made up part of his deficit in the heats. Penalised in the Prefinal, Rashid gave the maximum to make up no less than 18 places in a magnificent Final where he finished in 6th position.

The other Parolin Racing drivers had different setbacks, penalties or incidents on the track, which slowed down their progress. Valerio Rinicella lost all the benefit of his successful heats during a collision on the first lap of his Prefinal. Giovanni Trentin met with many hazards and penalties, which denied him access to the Final. Not always spared after his 33rd place in Qualifying, Maxens Verbrugge reached the Final and regained 10 places to finish 18th, his best result to date. Among the two new drivers of the team, the Australian Peter Bouzinelous made a remarkable debut. He made a superb comeback in the heats despite a penalty and was able to improve by taking another seven places in 6th position in his Prefinal. Penalised again for an unhooked spoiler in the Final, he unfortunately dropped to 29th. Finally, the Japanese driver Shimo Zhang took the measure of the category for his international debut in 60 Mini.

Increasing performance among the Juniors
Penalties and skirmishes also afflicted the three Parolin drivers in OK-Junior. They did however complete a very positive event in terms of performance. Martinius Stenshorne started with some very convincing heats as he was 13th on Saturday night. Sent back to 23rd in the Prefinal after a crash on the first lap, he managed to qualify 11th, achieving a magnificent rise of 12 places. His Final was interrupted after five laps by a collision.

Vinicius Tessaro was the best performer of the weekend despite somewhat disappointing heats. He recovered and reached the Final thanks to a remarkable nine-place rise to 11th in his Prefinal. The young Brazilian continued his momentum by finishing 18th with a gain of four positions, his best result of the season.

After an incredible dark series during the four heats in which he only crossed the finish line once, Jesse Carrasquero missed his qualification by less than 2 tenths of a second after a superb progression of 11 places which showed good potential for the upcoming events.

Nice effort from Mini’ to return to 6th in the OK Final.
Gabriele Mini’s meeting was marked by a concentration of bad luck. After setting the 7th fastest time in Qualifying, he gave up after a contact on the last lap of the first heat. He could have more easily compensated for this handicap if the small size of the category had not changed the rules. In this case, the order of starts for the following heats used the finishing order of the previous heat. Gabriele had to start from the back of the grid to take 12 places in the second heat. Things were not so good in the last heat as he was 26th after a penalty. The Sicilian regained control in the Prefinal, 17th with a gain of nine places, then in the Final where he finished in an unexpected 6th place after a further progression of 11 positions.

The next important event in OK and OK-Junior will take place in France, at the Angerville circuit for the first meeting of the FIA Karting European Championship from 19th to 21st April.