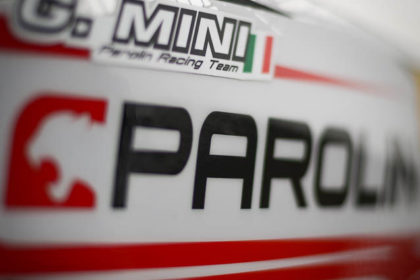 Lorenzo Camplese’s performance in the major KZ international events last year confirmed the quality of the Parolin Racing Kart chassis and prompted the Italian factory to reinforce the competitive presence of its Racing Team in 2017. The exceptionally difficult conditions of the first round of the WSK Super Master Series at Adria did not achieve the expected results, but the level of competitiveness of Parolin / TM suggests considerably better results at their next racing appearance.

To start the 2017 season, the Parolin Racing Team is relying on a more extensive programme consisting of four drivers. Lorenzo Camplese and Michelangelo Amendola defend the colours of the Venetian brand in KZ / KZ2, Gabriele Mini is the spearhead in the category 60 Mini, while the Omani driver Shihab Al Habsi is in OK-Junior. According to the categories available, the competition programme for Parolin Racing Kart includes the events of the WSK Super Master Series, then those of the CIK-FIA European Championship and the World Championship, a few races of the DKM and the Supernationals of Las Vegas at the end of the year.

The arrival of an additional driver in KZ / KZ2 will allow the intensification of the development work on the chassis of the queen category. The deplorable weather conditions of the first event of the WSK Super Master Series made it very difficult to find good results. Constantly wet throughout the weekend, the track often changed grip and complicated the objectives of the technicians and drivers. The frequent clashes and the numerous penalties for dropped spoilers clearly disrupted the course of the competition.

In spite of this unfavourable context, the team nevertheless managed to collect a lot of data needed to follow its plan of equipment development, and the balance of the meeting of Adria is far from negative. For his first race at the wheel of a Parolin with an IAME engine, the young Omani Shihab Al Habsi posted very promising performances. He returned to the top 10 of his second heat after setting the 20th time of qualifying practice. A penalty of 10” for an unhooked spoiler unfortunately cost him his place in the Final.

It was in 60 Mini that the very beginning of the season was the most convincing for Parolin Racing Kart. The Italian hopeful Gabriele Mini was able to use his new chassis straight away. At the WSK Champions Cup, he finished 2nd, on the podium with more than 100 participants, and for a long time held the first place in the WSK Super Master Series the following week. In the Final, four laps under the yellow flag and one incident after the restart prevented him from fighting as he knows how to do for victory, and he finished in 7th place.

All the resources of the Parolin Racing Kart team have been mobilised to approach the next race with the best chances of success, at the beginning of March on the 7 Laghi circuit at Castelletto di Branduzzo.