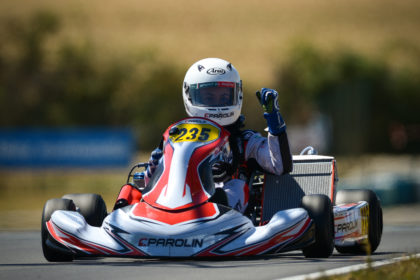 Parolin Racing Kart’s first European campaign in OK-Junior was completed in France with victory in the Final for the young driver Gabriele Mini’. The European Junior Vice-Championship also rewarded the performances by the Parolin / Parilla from the Italian team who were one of the most serious protagonists of the international season.

“We could not finish better in the European Championship!” said Marco Parolin. “At Essay, we really did our best, demonstrating once again our competitiveness in a new field. For his first year in OK-Junior, Gabriele Mini’ was the most consistent driver at the top of the rankings, whatever the conditions. It gives Parolin Racing Kart great satisfaction to have been so successful. After winning the WSK Super Master Series, we have finished 2nd in Europe. Our goal was to be among the best in OK-Junior, so we have surpassed it.”

The Parolin driver completed fulfilled his mission at the highly technical track of Essay (FRA). After setting the 7th fastest time, he has managed to get back into the top five in the Qualifying Heats by avoiding the pitfalls of this important phase, while still being among the fastest, as evidenced by his fastest lap in heat 3. He drove the Final with a lot of intelligence, confident in the potential of his Parolin / Parilla to take the lead in mid-race after avoiding the pitfalls of the first very hectic laps. Mini’ then drove to a great victory, more than a second and a half ahead of his rivals.

Gabriele finished his first European Championship in 2nd place, just three points behind the title, making his team proud. The next major event will take place at the end of September in Sweden for the World Junior Championship. Parolin Racing Kart has perfectly reasonable ambitions for this season’s flagship event. However, thanks to the great performances achieved this year, in Junior as well as in 60 Mini, the Italian brand is already preparing its strategy for the coming season using its strongest attributes.