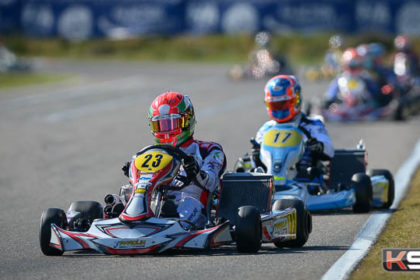 The CIK-FIA European Championship has just ended at Genk. With drivers entered in both KZ and KZ2, the Parolin Racing Kart Team can be proud of its return to competition among the best teams. With good performance, Lorenzo Camplese was too often delayed by on-track incidents to get results that show his potential. The new recruit in KZ2, Michelangelo Amendola also completed a fantastic journey into the top 10 in the Final.

“We are generally satisfied with our level of performance in KZ,” said Marco Parolin. “Luck was not on Lorenzo’s side throughout this European campaign, but he still managed to cross the Final finish line at Genk in 7th position, after many sporting hazards. The speed is there, the time sheets prove it, but we lack a bit of success to achieve in terms of results. It’s a good thing to be able to compete with the most experienced teams in our first international season.”

During the round of the DSKM German Championship run at Genk two weeks before the European round Lorenzo Camplese had already demonstrated high speed, in particular gaining nine places during Race 1. At the European Championship, he was first the victim of a collision in the last heat and was subsequently last from the first corner of the Prefinal. Only in the Final was he able to show the real standard of complete Parolin / TM by moving up 11 places to 7th position. A penalty of 5 ” for a jumped start unfortunately downgraded him to 11th.

A newcomer to the Parolin Racing Kart Team, Michelangelo Amendola did not miss his debut on the international stage in KZ2. Starting 38th after Qualifying, he first reached 19th place after the heats. He then regained two positions in the Prefinal, but in the Final he got his best result by finishing in the top 10, with a gain of six places in front of many leaders in the category who have the advantage of much more experience.

“Michelangelo is a young Belgian driver of 15 years who has started this year in KZ2,” explained Marco Parolin. “He raced in the CIK-FIA Academy Trophy in 2014 and 2015 and continued his training in our Championkart academy. We wanted to give him a chance in international racing and we do not regret it!”

It was not obvious that Parolin Kart would return to competition in the most competitive category, KZ, where the most experienced and highest standard of teams and drivers can be found. The initial Parolin Racing Kart Team performance has confirmed the wisdom of its choice. This sporting approach has also enabled new business achievements. The title of Asia-Pacific Championship for Camplese last year in Macao is a good example.

“We cannot reveal our comprehensive strategy for the future, but it is certain that we will get further involved in racing. Our first results are already conclusive. We need to develop our structure, both in terms of the drivers and logistics, to better prepare us to compete. We will now focus on the Kristianstad world event in Sweden in early September with greater ambitions.”