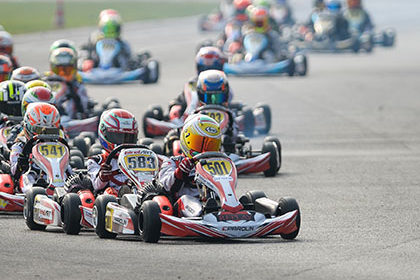 Parolin’s new strategy for young drivers continues to bear fruit. During the first round of the WSK Final Cup at Lonato, the influence of the Italian brand in 60 Mini was impressive. Quality and performance were in evidence, as demonstrated by Brando Badoer’s excellent progress at the forefront of 60 Mini and Matheus Morgatto’s debut in OK. At the same time, Gabriele Mini’ confirmed the effectiveness of the Parolin OK-Junior with his 3rd position on the finish line.

“We are of course very satisfied with the current usage of our products in the Mini categories”, explains Marco Parolin. “In major events such as the international finals for the Rok Cup and for IAME that have just finished, or the WSK Final Cup that has just started, the breakthrough Parolin chassis is very strong with many teams using it. At Lonato, Parolin was the most represented brand in all categories. The performance was also there, as shown by the results of Brando Badoer in 60 Mini for example.”

With 38 Parolin chassis out of 95 participants 60 Mini, the WSK Final Cup set consisted of 40% Parolin productions. A dozen teams had chosen the performance with the Italian brand. At the finish there were three Parolins in the top four of the Final and four in the top five of the championship. Not to mention the pole position, the record of the event, six wins and eight fastest laps in the heats, and the second step of the podium for Brando Badoer.

The son of the former Formula 1 driver had a superb weekend at Lonato. He first clinched pole position in Qualifying and ensured four victories in five heats. Also the winner of his Prefinal, he was still fighting with the best in the Final and was on the 2nd step of the podium with the satisfaction of being the fastest driver of the meeting.

The other members of the official Parolin Racing team performed well in the top three of the heats such as Keanu Al Azhari, Douwe Dedecker and Maksimilian Popov, or in the top five like Ashkay Bohra and Zachary David. The intensity of the races did not allow them to be consistent enough to confirm their form, but the potential is undeniably present.

Still among the fastest in OK-Junior, Vice World Champion Gabriele Mini’ was about to confirm his talent by finishing in 3rd position in the Final at Lonato, but a detached spoiler penalty later dropped him back in the standings. The WSK Final Cup also gave the opportunity to young people to take the step from 60 Mini to OK-Junior as Mini’ had done last year. Martinius Stenshorne made a perfect transition from 60 Mini to OK-Junior, revealing great skill and speed in his first race. Injured at the start of the Final, he unfortunately had to stop there. The third qualifier of the three drivers in the team, Alessandro Cenedese also retired during this incident which affected a dozen drivers.

Finally, the debut in OK of the Brazilian Matheus Morgatto was exceptional and his speed impressed the specialists. Up to 5th to his Prefinal, he was pushed back to 10th place, but then moved up from 20th to 12th position in the Final.

The racing season is far from over and Parolin still has great opportunities to strengthen its reputation on different tracks before starting the 2019 preparation from the excellent base of 2018.