Parolin and Travisanutto in the world top 10 in KZ 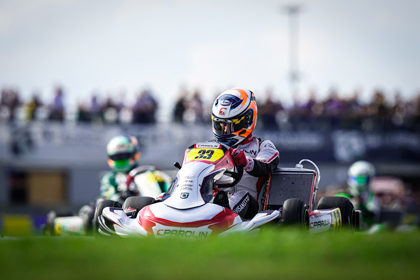 Lorenzo Travisanutto, winner of the 2021 KZ2 International Super Cup, has completed his first season in the world’s elite KZ category in fine style. At the wheel of a very competitive Parolin-TM Racing package, he reached 8th position in the Final of the World Championship held in France at Le Mans. In the brand new KZ2 Masters class Riccardo Nalon put in a rewarding performance to make remarkable progress to 4th place. The podium was very close for the Parolin Motorsport team!

For its return to Le Mans, in this high temple of motor sport, the World Championship kept all its promises. The event was followed by a large number of enthusiasts on the streaming platforms, including Eurosport, and by a huge number of spectators massed around the circuit. The drivers were not spared by rain and the teams worked hard on Friday and Saturday, but the Parolin Motorsport team always reacted professionally to these changing situations.

“It has been several years since the KZ class has raced at Le Mans and I am pleased to see that our team has been able to work in the right direction to allow our drivers to express themselves fully on this circuit. Lorenzo Travisanutto and Francesco Celenta, both entered in KZ, kept a particularly strong pace. But it was never easy. On Friday morning, the only Free Practice session before Qualifying was run on rain tyres, but we managed to find the right set-up in the dry to allow Lorenzo to be in the leading group. He then confirmed his strength in the class in the races and his very high level of performance. Francesco was also very competitive. He was the second fastest rider on track in his Super Heat, in which he climbed from 8th to 3rd place. He had a chance to get into the top 10, but lost valuable positions on the first lap”.

“I would like to congratulate all the other drivers of the team in KZ2 and KZ2 Masters for their hard work and determination during five very demanding days for all the protagonists of this great international meeting. Riccardo Nalon’s 4th Final position in the new FIA Karting competition open to drivers aged 35 and over is particularly close to my heart. We were able to confirm the competitiveness of our chassis with a minimum weight of 180 kg”.

Lorenzo Travisanutto
The Italian driver achieved a perfect record in Le Mans: P9 in Timed Qualifying, P9, P4 and P5 in the heats, P8 in the Super Heat and P8 in the Final. Well done!

Francesco Celenta
A better time in Timed Practice could have allowed Francesco to fight for the front. But he never gave up and finished 14th in the Final.

Mario Schettino
In Le Mans, Mario was in contact with the best KZ drivers. He was only missing a few points to participate in the Final.

Marco Tormen
Five times out of seven in the top 10 during the Qualifying Heats, he brilliantly won his place for the Final, where he climbed from 26th to 17th place.

Angelo Lombardo
A retirement and a disqualification did not allow Angelo to reach the Super Heat despite an excellent performance in both dry and wet conditions.

Nathan Crang
A retirement in the last heat cost Nathan dearly! The New Zealander also had three good runs in the top 15.

Fotis Sotiropoulos
The Greek driver was extremely combative and consistent during the Qualifying Heats, which allowed him to gain no less than 45 places between the Qualifying and the ranking at the end of the Super Heats!

Riccardo Nalon
17th in Timed Practice, the Italian had to fight hard to move up in the hierarchy. He came back 8th on the starting grid of the Final after an excellent Super Heat finished in 3rd position. He then brilliantly achieved 4th place in the Final.

David Malcom
David’s time was a little off, but he had some good heats and Super Heats afterwards.