Double victory at Sarno for Parolin 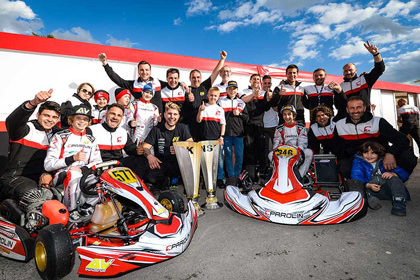 Thanks to Gabriele Mini and Tymoteusz Kucharczyk, Parolin Racing Kart was able to twice climb to the highest step of the podium of the WSK Super Master Series at Sarno, in OK-Junior and 60 Mini. This double success, which follows a series of exceptional performances since the beginning of the season, demonstrates once again the quality of the Parolin chassis within a very competitive environment.

The Sarno circuit brought a new configuration compared to the events already contested in 2018. Parolin Racing Kart showed that its first-class results did not depend on the track nor on the grip conditions.

“The win for Gabriele Mini in Junior really makes us very happy for several reasons,” said Marco Parolin. “First of all, this driver has great potential and deserves to succeed. We were right to trust him last season. We are very proud to be able to provide him with equipment that will give him the means to achieve his ambitions in OK-Junior this year. In 60 Mini, our chassis continue to succeed. We are slightly disappointed that Martinius Stenshorne did not get the success he deserved, but that’s racing. Tymoteusz Kucharczyk was there at the right time to secure the win and Stenshorne still leads the WSK Super Master Series.”

Kucharczyk had started by taking pole position in 60 Mini in front of 75 opponents. Stenshorne beat him in the Qualifying Heats before taking the Final victory. He had taken the lead on the last lap when he was when he was overtaken. A record holder at the Sarno event, Kucharczyk made a magnificent comeback from 7th place and took his chance on the last lap to win against formidable opposition. The presence of four Parolin chassis in the top 10 of the category reinforced the technical demonstration by Parolin. The team’s other drivers, Brando Badoer, Nikita Andreas Johnson and Maksimilian Popov also qualified for the Final, only Akshay Arjun Bohra failed due to a penalty.

The progress of Gabriele Mini in OK-Junior has something to dream about. He began by taking 2nd place in Qualifying Practice among more than 80 drivers before making his mark with three wins in the heats. Starting from the third row on the starting grid of the Final, Gabriele was quick to take control on lap 4 and progressively distanced each rival. He thus won a brilliant victory with more than 1.8” ahead of his pursuers. He kept the record of this event to the end and returned to just one point away from the provisional leader of the championship. Alessandro Cenedese continues to progress among the many OK-Junior drivers. He had quickly reached 16th in the Final when a collision forced him to give up.

With greater determination, Parolin Racing Kart is preparing to compete in the last event of the WSK Super Master Series next weekend on the same circuit of Sarno. In addition to the hunt for the OK-Junior and 60 Mini titles, this event will actively prepare for the upcoming opening of the CIK-FIA European Junior Championship, which will take place on the Neapolitan route two weeks later.