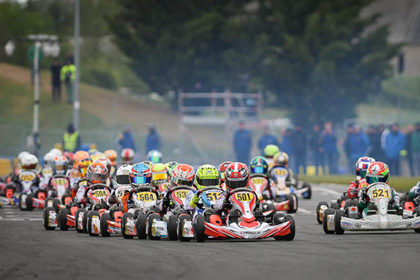 On their first expedition out of Italy this season, the 60 Mini drivers discovered the French circuit of Angerville at the second round of the WSK Euro Series. Again well represented in the 8-12 age group, the Parolin chassis again demonstrated outstanding performance as the weather complicated the grip of the track. Al Dhaheri was on the podium in 2nd and Al Azhari finished 4th. Gabriele Mini’ did not have an easy weekend in OK, but he managed to maintain his position in the WSK Euro Series standings.

Intense battles in Junior and OK
The month-long series of races at Angerville, from the FFSA meeting to the WSK Euro Series via the FIA Karting European Championship, caused some dissatisfaction in OK and OK-Junior. In the Junior category, the Brazilian Vinicius Tessaro was the only one to defend the colours of the Parolin Racing team. After some very complicated Qualifying Heats – two retirements and a penalty – he climbed 10 places to finish 21st in the Final. Gabriele Mini’ was fighting at the forefront in the OK category as always with his 4th place at the end of the heats, but the Finals were less successful and he was 8th in the Final while maintaining his provisional ranking in the WSK Euro Series.

More remarkable performances in 60 Mini
Giovanni Trentin set an excellent time at 4 hundredths off the pole of his group and took 4th place overall in 60 Mini Qualifying. After setting the 10th fastest time, Keanu Al Azhari was three times fastest in his heats and climbed to 3rd position before the Finals. Maxime Verbrugge came back from Qualifying with good heats and reached 4th position in his Prefinal. He confirmed his form by crossing the finishing line of the Final in 10th place before being demoted to 18th by a spoiler penalty. With another fastest lap in Prefinal A, he lost his 4th position because of a penalty.

Meanwhile, Rashid Al Zhaheri won Prefinal B and long fought in the top three of the Final before taking 2nd place in a last-ditch effort. This excellent result allowed him to move up 10 places in the ranking where he is now in 3rd position.

Peter Bouzinelous again qualified for the Final and gained 12 places to finish 22nd. Qualified thanks to 10th position in the Prefinal, Valerio Rinicella made a good start to the Final in the top 15, but then gave up ground before the finish. Finally, Shimo Zhang reached the Finals for the first time after some complex heats to handle for the young Japanese driver.

“The WSK Euro Series had very different conditions compared to the two previous meetings at Angerville and the competition proved difficult,” explained Marco Parolin. “Gabriele Mini’ did not regain his usual level of performance, but he managed to maintain his position in the Championship. We were very much present in 60 Mini with half of the grid equipped with our chassis. Several fastest laps in the race and four drivers in the top five proved the quality of our products once again. I’m glad that Al Dhaheri was able to finish 2nd and get closer to the top of the standings. Al Azhari was very fast while Verbrugge was finally able to express his talent. The other drivers of the team continued their progress despite changing grip conditions. Zhang gave us great satisfaction in qualifying for the Final in his second meeting in Europe. “

The next meeting of the FIA Karting European Championship will take the Parolin drivers to Belgium, to the Genk circuit, from 16th to 19th May.