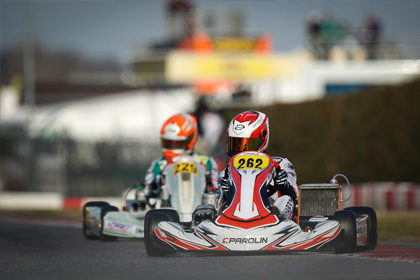 The Parolin Racing Kart team were delighted to be among the many participants in the 25th Winter Cup which has just taken place on the South Garda Karting circuit in Lonato. James Wharton and Matheus Morgatto displayed the Parolin colours brilliantly in the OK category while new drivers discovered the potential of the brand from Bassano in OK-Junior. In Mini Rok, Rashid Al Dhaheri scored another success at the wheel of a Parolin chassis.

For its 25th anniversary, the famous Winter Cup in Lonato featured particularly favourable weather for the 300 participants from 47 countries. As always during this great race at the beginning of the season, battles proved to be increasingly fierce right up to the Finals on Sunday afternoon. Now a Prema Powerteam driver in F4, Gabriele Mini’ took the opportunity to come and greet the team, with whom he made his mark before moving on to single-seater racing, and was named 2019 FIA Karting Rookie of the Year.

Marco Parolin confided: “It was a great pleasure for us to see Gabriele at the Winter Cup. We have experienced an extraordinary adventure together, from Mini to OK, he has been our benchmark and development driver, a symbol of Parolin’s rise in the international categories. It was a particularly productive collaboration for both parties, it’s good that today’s young drivers realise what a close relationship based on mutual trust can bring.”

The presence of the official Parolin Racing Kart team in Lonato was part of the continuity of the programme established with the aim of preparing the drivers and the equipment at the beginning of the season in the most effective possible way.

“We took advantage of the good weather and the rising temperatures to accentuate our work on the grip in view of the upcoming major events“, explained Marco Parolin. “In OK-Junior, we were able to use the LeCont tyres that will be used in FIA Karting competitions for the first time in competition. Although our junior driver training is not yet complete, in OK Wharton and Morgatto are rising stars capable of pulling the whole team upwards“.

James Wharton fought steadily in the top four of the event until the start of the Final, while Matheus Morgatto performed well in the top three, with 2nd with the fastest lap in Super Heat 2, to make up for two setbacks and reach the Final. Meanwhile, Hugo Sasse and Mikael Saaskilahti were battling it out in the pack after distant Qualifying times. Several new drivers took advantage of the event to familiarise themselves with the team in OK-Junior. Maksim Orlov stood out for his speed and his ability to gain places, even though he was only competing in his second Junior race.

Many Parolin chassis were entered in the Mini Rok category and many of them scored very good results: for example, twelve of them finished in the top 20. Rashid Al Dhaheri took advantage of the opportunity to take another brilliant victory in the Parolin colours.